From the time I was twelve until I had a hysterectomy at age forty, I dealt with excruciating pain at the beginning of my periods most months due to Endometriosis. It also caused me trouble getting pregnant and caused me to have a horrific pregnancy. My doctor said he was surprised I got pregnant at all. After Evangeline, I wanted to have more kids, so we tried mild fertility pills, which worsened the Endometriosis. There was one point during the treatment when my period was late, so I took a pregnancy test, and it was positive. I was so excited. All the pain and fertility treatment was working. My doctor told me to come in for a blood test. I remember clearly that stupid nurse. She was so chipper when she said, "OK, your test is negative." she said like it was great news. I literally grabbed the wall. I was devastated. "What?" I asked. "It's negative. You're not pregnant." She said again in that obnoxiously chipper tone.  I swear I wanted to punch her in the face. I got to my car and completely fell apart. It was a horrible day.

My sister miscarried triplets at about four months; she caught them in a Big Gulp cup on the toilet and took the cup with her to the hospital. The nurse showed her all the different sacks. They were fraternal, Only one had really been developing, and she could make out where the eyes were starting to form.  She also had a tubal pregnancy that ruptured.

The womb is a fickle bitch. Getting pregnant, staying pregnant, all of it is so crazy. If you talk to ten women, you could hear ten different stories. I know women who've had tumors removed from their bodies that contained hair and teeth. Some of these tumors even develop eyeballs, parts of a developing human that never entirely made it?

I watched Amy Schumer's documentary, Expecting, and I felt almost every minute of it. She had the same illness throughout her pregnancy that I had, Hyperemesis Gravudarum, although I don't recall it having a name 24 years ago when I was pregnant with Evangeline. I weighed less at seven months pregnant than I did before I got pregnant. I couldn't swallow my own spit, or I'd vomit. I literally walked around with a spit cup-like someone who dipped tobacco, and I threw up 24 hours a day. Only in the last 2 months did it taper off to just a few times a week.

Though changing hormone levels often make many pregnant women nauseous, when someone is suffering from HG, they're experiencing very severe nausea and vomiting that leads to weight loss. The true, direct cause of HG is still unknown, but the symptoms are known to show up between 4-6 weeks of pregnancy and usually ease off around 20 weeks, though some women will experience HG for the entire length of their pregnancy. Often, women with HG are unable to keep food down at all, and this leads to even more complications, like dehydration and low blood pressure."

Even after having a horrible pregnancy and awful twenty-two-hour labor with Evangeline, I was willing to try that mild fertility treatment because that's what we women do. We don't "forget" how awful it was; we're just ready to go through the dreadful again. But treatments ended up making my Endometriosis worse, which led to another surgery to clean it out. Then I had some very painful cyst burst, and my stupid oven (that's what I called my Uterus) just kept right on being an asshole. So we decided to stop trying. Then our first adoption miracle happened, our baby Steele. You can read about that here. 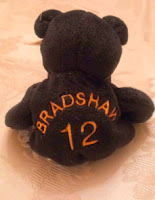 Two years later, we got a call about another adoption opportunity, and we jumped on it. We were so excited. We were several months into the process, the baby was a boy, and we'd already named him Bradshaw. We had Steele's room ready with a bassinet, and we bought a little Beany Baby named Bradshaw. He was due the last week of August 2006.

I remember getting that awful call from the attorney at the beginning of August. The mom had decided to keep the baby. She named him Damien.

Just typing that last paragraph was hard. I think about him every August 26th, that's his birthday. He's 14 now. I hope he's happy and has a good life. I wonder if he knows that another family gave their heart to him too and thinks about him every year on his birthday?

I was a pro-pre born extremist for many years. Now I've raised a diabetic daughter who already has vision loss and other health issues due to her twenty-two years living with this chronic illness. Her blood sugars have never been under control, so it would be perilous for her to be pregnant. She has an IUD. I'm happy she's on birth control. She wants kids, but she also knows how risky pregnancy would be to her health. We've had long conversations about this. I've told her that I support using the morning-after pill if something happened with her IUD, and I'd support her choice if she felt she needed to or wanted to get an abortion. I'd also support her choice not to have one, of course. I'm personally pro-ALL-life, so I'm pro my 24-year-old daughter's life. I trust that she, along with her doctor, would know what's best for her life and make the right decision.

This is REAL LIFE. She is not hypothetical. She's my child. She's alive. A pregnancy could kill her. There's a lot to consider. It's not as cut and dry as people who throw stones like to think it is.

Our bodies are complex and wonderful. Our wombs, infertility, Endometriosis, when life begins, the viability of a fetus, all these subjects are issues only women can understand fully. Living breathing women and their bodies being debated and tossed around like political footballs, by men mostly, is why we have such extremes when it comes to policy and public debate about reproductive health. Women, not men, need to be the ones who decide OUR issues, who make policies that affect OUR bodies.