The Only Words I Remember 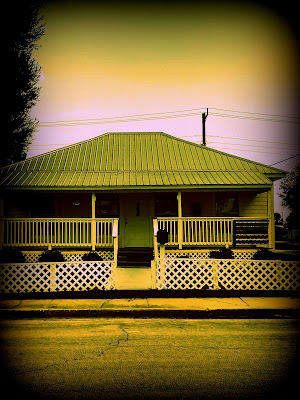 Stop! Why are you screaming?"
"I'm leaving"
Those are the only words I can remember Donnie Chandler ever speaking to me.
It's so weird. He dated my mother for a year or more before they married, then they were married for over a year and we lived in the house with him and my mom. But the only words I remember him speaking to me are after I sat up and screamed "MAMMA"  when he tried to turn me toward him while he was jacking off beside my bed.
I remember that interaction.
He was so startled when I sat up, didn't look at him, looked straight ahead at the wall in front of me, the door to the left that he'd shut. And I shouted, "MAMMA" as if to push my scream through that door, and through the house so my mom could hear. Her room was in the front and she was asleep behind a shut bedroom door with a loud window AC unit blasting. She didn't hear me.
I recently drove by that house and took a picture of it. It looks so small now. Her room really wasn't that far away.
When I was little, it was miles away.
Donnie started by walking around the dining room with the light on at night. The dining room was connected to my room. The bright overhead light shined through my open bedroom door and right onto my bed. I don't know how many nights he stood naked in my door. Somethings feel dream like.
That was traumatic enough.
The next step was the jacking off by my bed, inches from my little girl face. Just typing this makes me want to cry for little Carole. How could someone do that to a child? I'd never seen a penis before. I was innocent. I was a child. He was my step father. He was supposed to protect me. It was so wrong.
I remember pretending to be asleep. I remember knowing when he came into the room and thinking that if he ever tried to turn me toward him, I had to scream. I remember the awful sounds. Clinching my teeth and squeezing my eyes shut tight trying to think of anything else. I remember the night air coming through the open window right by my bed.
"You have to be ready, Carole. You can do it. Just scream, don't think. If he touches you, you scream." I had to psych myself up. And then it happened, I felt his hand on my shoulder, pulling me to turn toward him. I shot up in the bed and screamed, "MAMMA!"
I swear he jumped. "Stop! Why are you screaming?" Like he fucking didn't know?
I'm petrified, completely afraid to move. I spent years wondering why you peed on me, having no idea why your "pee" doesn't stink, then as a teenager I learn it's because it wasn't pee!
So yeah, Donnie, you thought I'd just roll over when you grabbed my shoulder to turn me toward you but that's not what happened is it, asshole? No! Because at age nine rather than sleeping and dreaming of dolls or playing with my friends I was wide awake working myself up mentally to fight off the sexual advances of my step father.
I haven't sleep through the night since then.
There's so much tied to what this did to my psyche and I've delved into it a lot recently in therapy. The fact that the only words I can recall Donnie Chandler saying to me are "Stop! Why are you screaming, and I'm leaving" is telling.
I'm not sure yet what it tells me.
What I do know now is I'm so proud of little Carole. I wish I'd told myself how proud I was of her more often rather than hearing my grandmother's voice telling me, "Well, he did say you were a sexy nine year old." Yes, my grandmother told me that when I tried to talk to her about the abuse one time. How awful is that?
I shouldn't of had to scream because my step father was trying to sexually abuse me, no child should be in that position. No I wasn't a sexy child, no nine year old is sexy. No man is justified in sexually assaulting a child. No adult should try to excuse such behavior and blame a child. Nothing about that was my fault. I get to be mad at her for saying that even now, even though I love her and miss her. No one get's to tell me not to be mad at her about that.
Words are seeds and the roots grow deep.
But what about deed? What about good deeds. Good deeds are too often overshadowed by negative words and bad deeds. I screamed which startled him enough to stop him that night. I'm sure he was afraid I would scream again and wake up my mother. I told my friend down the street a few weeks after that night and she told her mom and her mom told my mom.  After talking to me she took us and left that day. These are good deeds. They were difficult deeds but we did them. My mom had to move us back in with our grandparents, which wasn't ideal at all but she was a single mother now again with three kids. She made the right choice. She did good. I did good. At age nine, I became a fighter. My mom did what a lot of mothers at that time were not doing, she listened to me and believed me, chose me over an abusive man.
I'm gonna work on seeing the good I learned from this.
I'm proud of little Carole. I'm proud of my mom for taking us away from him.
Finger Nail Droppings sexual abuse