So What if You Get Some Brown On You?

This Post was from last year, I wrote it right after the shooting in El Paso. It's still relevant today.
A 21 year old foot solider in the war against the browning of America walked into a Walmart in El paso Texas and killed 22 people. Some children, some parents, people shopping for back to school items. He drove there from Dallas. He was on a mission to rid America of the most brown people he could. He knew he was just one young recruit, but he had to do his part. The president told us we were being invaded! All the Fox News Commanders kept repeating it. 8chan fed the desire to be needed, be a part of something bigger, and the president has made it clear he wants to Make America Great Again, take it back to a time when brown people knew their place, scrubbing toilets, serving white people food and digging our ditches not being president, being in congress or being allowed to come here and beg for asylum just when ever! No matter what you escaped from in your home country or why you walked thousands of miles, we don't have enough room in this vast, expansive, excessively large and wealthy country! And brown people are poor and dirty and they work really hard and make white people look bad because they will live in small places and save money so their kids can go to college. We can't have brown people coming in here and out working us! So that day at Walmart, that young solider decided to head off the invasion himself. Inspired by other soldiers in the Anti-brown America Army. 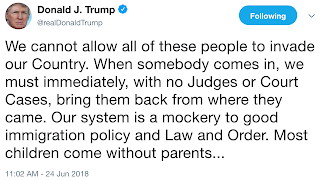 Tucker Carlson “It’s indefensible, so nobody even tries to defend it. Instead, our leaders demand that you shut up and accept this. We have a moral obligation to admit the world’s poor, they tell us, even if it makes our own country poor and dirtier and more divided.”

Of course it's nauseating and disgusting but I have no doubt that is exactly what the terrorist who killed all those innocent people was thinking. Mostly I know this because he left a manifesto that said as much.

But I have a serious question for anyone reading this, what is the problem with America browning?  How did so many people let themselves become brainwashed by Fox News into believing it was a bad thing? We are all people. In most other countries that are much smaller than ours the populations speak several languages but here people freak out of someone speaks Spanish. I would love to know how to speak Spanish.

When I was in Florida I hearda relative say "look what we have in Congress" disparagingly speaking about "The Squad"  like brown women were taking over. Let's look at the facts..

Twenty-five women (17D, 8R) serve in the United States Senate in the 115th Congress. Of these 25, four are women of color.

56 women have ever served in the Senate, including 36 Democrats and 20 Republicans.

Women in the U.S. House of Representatives 2019

102 women hold seats in the House of Representatives, comprising 23.4% of the 435 members in 2019. The women represent 34 states; 89 are Democrats and 13 are Republicans....43 women of color: 22 African American women, 6 Asian Pacific Islanders, and 12 Latinas, 2 Native American women, and 1 Middle Eastern/North African woman.

So it looks like in reality women aren't a majority of the house or senate and women of color certainly aren't even close to "taking over" or "invading".

We have plenty of room!
47% of the United States is uninhabited.


"Net immigration brings people, economic activity, jobs and taxes; businesses flourish where the population is growing and they suffer where it is not. Population growth is why Texas is doing well and, say, Maine is not. And do more people bring more unemployment? On the contrary: the jobless rate in Texas is just 3.8 percent. In stagnant West Virginia, it’s 5.2 percent.

To be sure, Trump’s administration dislikes meeting our legal obligation to receive asylum-seekers. Especially when they come from Honduras, Guatemala and El Salvador, where US policy is no small cause of the crises that drive people out. But asylum-seekers and refugees number only between 50,000 and 100,000 per year, numbers we could absorb in Texas alone, where since 2010 we’ve been gaining a half-million or so new people every single year."
Email Post
Labels: Race Race Relations