Funny how life smacks you in the face with yourself.

And it will smack you in the face with everything else.

Both good and bad and at the same time too often.

This last year I've said to myself more times than I can count, "But did you die? No? So shut the hell up. Buck up! Grow a damn vagina Carole! No one else is going to do it, you have to!" And somehow I make it through another day.

The great benefit of being raised by a single mother and watching my sister live her life, balls to the wall is I KNOW I can rise to the occasion simply because I'm alive.

I am in pain everyday in my heart and in my body. I have Frozen Shoulder. My entire left arm hurts all day every day pretty much. I'm in physical therapy which helps. Motrin helps. I have to take it before bed and get up and take it during the night.  I'm left handed and it is of course my left arm. Washing my hair is difficult. I can't reach back to my bra strap with my left hand. The joy of cleaning my house on the weekends is gone, now it is a painful chore. I can no longer scrub my bathtubs like I use to. Yes this makes me sad. I found my weekend cleanings to be therapeutic.

The accident I was in, where that guy hit my car in the back made the Frozen Shoulder much worse. I had been dealing with pain in my shoulder off and on before that and was told it was tendinitis and bursitis but when I got hit, that jolt just kind of threw everything out of whack. So now they tell me it's Frozen Shoulder which can affect some people for up to three years. Because of course, nothing else was going on in my life so why not? 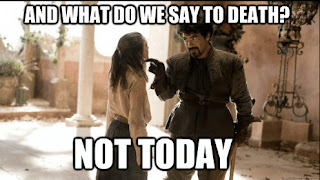 I went to visit Abel last Saturday at the Juvenile Detention Center. It's one side of the St Bernard Parish jail. The youth are held on one side, adults on the other. It was exactly like you see in the movies. A small grey room made of concrete block, a row of 3 cubicles, sound proof glass dividing the incarcerated from the free that have come to visit them for that cherished hour. The phones on both sides of the glass that we had to pick up to hear each other. He was not in an orange jumpsuit but an orange long sleeve shirt and orange pants. When he saw me he grinned and so did I, it was that knowing grin because I'd told him many times that even if he were in jail I would still be his mother, I'd be the one sitting across from him, holding the phone, looking through the glass. And here we were.

It was a nice visit.

He's been there for almost two months now. We pick him up on April 22nd to take him to YCP in Carville Louisiana. He will be there for five months.

Evangeline doesn't allow me to put her business on social media anymore but I will tell you one day I had to call EMS from my work in Baton Rouge to go to her home in New Orleans and she woke up with an IV in her hand giving her glucose. That was after they had already tried to put the IV in her other hand. So since I was involved in that story I will tell it and I will tell you, things with her are both really good and really bad.

Steele's been on a heart and blood pressure monitor for a month now because he keeps having these "episodes". We don't know what else to call them. I think it's stress or Social Anxiety Disorder. But his heart is fine it looks like and his blood pressure so far. We are still not 100% sure what is going on but he doesn't ever want to be around a lot of people, so he stays home more. He describes his episodes like he will get hot, heart will race, said he feels like everyone is in a dream or far away, gets dizzy. It happens at random times, not just when he's around a bunch of people. I think the stress of everything that's gone on in our home recently may have something to do with it.

Thank God we are all in counseling. Steele is so in the middle. He loves his brother, hurts for him, hates the path he's chosen and he misses him but it's also better at home now, more peaceful and that is conflicting to him as it is to everyone. Steele also has to live in the tension all this has caused between Dean and I. We are all stretched SO FUCKING THIN!! 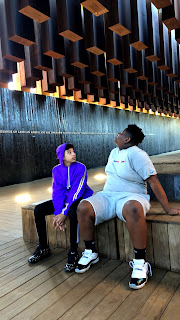 And I had a wonderful trip to the mountains planned for Steele, his friend and I for Spring Break. It was going to be such a beautiful and peaceful time away just me and them in the mountains of North Carolina. Something we desperately needed. I was going to work on my book and enjoy the quiet and tranquility of nature, they were going to play xbox until their brains exploded then go out and explore the mountainside. But no, those plans got crushed because of course. So we went ahead and came to Atlanta for a couple days. That's where we are now. And I found the coolest place to stay, Clermont Hotel. You know how I am now, I cant just stay at a "normal" hotel anymore, Europe ruined me and Hotel Royal in Long Beach ruined me even more. I knew I had to find a vibe-y place to stay in Atlanta, it took me three days of searching but this place totally meets my expectations.

So no relaxing Spring Break in the mountains which is extremely disappointing to us but we went to the Legacy Museum in Montgomery yesterday and today we will have some adventures around Atlanta.

But did you die? No? So shut the hell up Sue.
Adoption Bang Your Head (Metal Health) Family Pictures Finger Nail Droppings My issues