Reflections From My Days at the State Capital 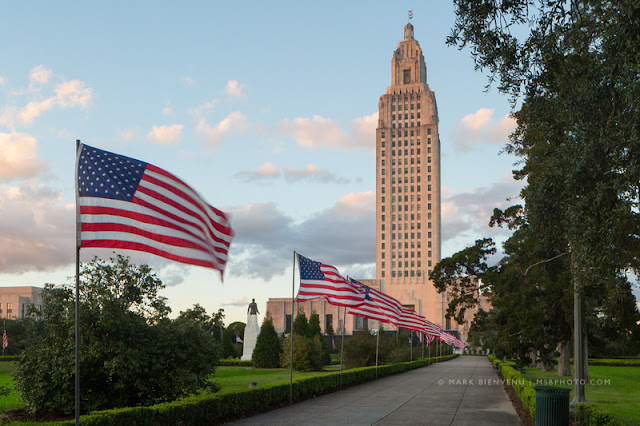 During this summer's Louisiana State Legislature regular session I went to the capital one day a week and sat in on several different committees.  I wanted to see what it was like being a state legislator since I am considering running for state office in 2019.

My friend Natalie is the Deputy Assistant Secretary at the Dept. of Corrections and she agreed to help me learn how things worked down there. She introduced me to important people, endured my questions and inability to be of any help to her in return.

Politically we are on different sides of most issues, we are both registered Independents but where she leans more right, I lean more left. So I deeply appreciate her helping me.

Here are some standout thoughts, memories, lessons learned from my (very few) days at the capital.

As Natalie had previously told me, the atmosphere wasn't as extremely partisan as the media portrays it. Most of them are respectful to each other, are friends or at least friendly even when they don't agree. I was shocked by how many non-politicians were in the legislature. I had such a misconception of who was up there running the show. I thought they were all lawyers, highly educated, rich people or people who came from political families. It was reassuring (and kind of not) to see that a lot of them were none of the above.

One day Natalie and I were discussing a certain issue via text, I made a sweeping judgment and she countered with a more diplomatic approach to the subject. I text her back, "I am an activist who has to learn how to be a politician." Politicians need to be open minded, willing to work with people they don't agree with, willing to compromise for the sake of wanting to see progress toward a goal, know how to "win friends and influence people" that's how they get things done and get people to do what they want but an activist is more narrowly focused, more dogmatic than diplomatic because we are usually working with and speaking to people who think like we do. SO one thing I learned is I still have a lot to learn.

My favorite realization was how many women are currently breaking up the old boys club. I watched some very impressive ladies in action. I found that the women came to committee more prepared, determined, knowledgeable and ready to fight for what they wanted to see accomplished. The men are comfortable resting in their place at the top but they may want to wake up because the ladies are not playing and they are certainly not sleeping.

One day I was sitting in the little Cafe at the capital with Natalie in between committee meetings, a tall blond lady in a power suit sat in the open chair at our table. I watched and listened as her, Natalie and another Lobbyist started talking shop. I felt like I was in a movie, one that hasn't been made yet where the coolest chicks are running the show, they're eating bunless cheese burgers with a fork, discussing criminal justice reform and who they have yet to convince to vote yes on their bill. I watched as the power suit clad tall Wonder woman wrote furiously in her leather-bound notebook, talked fast and then in a flash, she was gone.

I'm about to turn 50 years old and I felt so small and childlike at that table with these women. I want to be them when I grow up.

Another favorite time there was when I witnessed the committee hearing concerning a proposed law that would make it illegal to remove Confederate monuments without a state wide vote. Senators JP Morrell and Karen Carter Peterson stood out to me because they were so well prepared for this fight. They had the facts, they had the stats, and mostly they had the fortitude to patiently deal with the ridiculous amount of ignorance that came with the testimonies in favor of this bill. I was beyond impressed by those two! They made me proud to be from the same state.

While I was at the capital watching and learning I felt invigorated, fearful and excited like when you're standing in front of a roller coaster you can't wait to ride but you also are afraid to ride. I first inquired about running for office back in January of 2016, well before the idea of Trump being president was a real nightmare. Back then me running for office seemed farfetched but now it doesn't seem quite so crazy.

There are two positive results of Trump being elected president; one is that it woke us up. We were comfortable thinking that nothing could stop the forward motion of our country. I didn't believe a huge chunk of our population feared progress as much as they did.  I personally never dreamed that a man supported by the likes of Alex Jones and David Duke would be elected by people who claim to "love the lord your God with all your heart and love your neighbor as yourself."

The second positive result of Trump being elected is how it has caused a surge in women running for office. I believe that will be the biggest shock to this new oppressive government and those who support it. Women are on fire now, we don't accept bullying, we know a child when we see one and we know how to deal with said child and in the words of the guy making that profound proclamation at the beginning of Unbreakable Kimmy Schmidt "Females are strong as Hell!"

I will be a part of this new wave; I have to be for the sake of my own sanity and for my children's future. Maybe my part in this fight will be as Louisiana State Legislature, we will see.
America blogging Finger Nail Droppings Politics