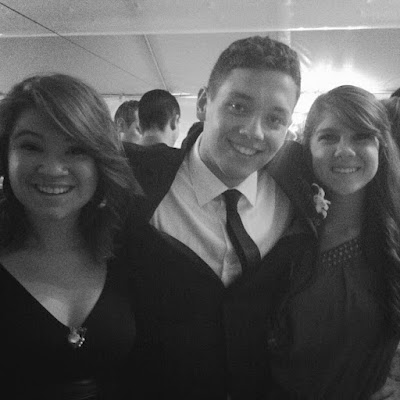 The vibration and the buzz of my phone on the night stand woke me with a jolt.
It was 1:30am.
I grabbed it, turned it over facing me.The glare of the light made me squint and struggle to see the name, "Anne Edwards" it read blindingly.
It buzzed again. "I'm not answering" I thought. And I flipped it back over, face down on the night stand.
"I can't" I thought.
I  took a deep breath.
I knew it had to be bad news. Why else would Anne be calling me at 1:30am on a Thursday.
It buzzed again.
I had to answer.
I knew I had to answer.
"Hello?" I managed to get out.
"Carole, Alex Earles died...Alex is dead...."
All I could say was "Oh my God, oh my God" over and over again and "Lorri."

I don't remember much else about the exchange but one statement stood out, Anne said,  "One of our babies has died, Carole."
And that took my breath away.
I pictured all our kids playing around Lorri's pool or in Anne's back yard. So many memories flashed.
Smiling, laughing, happy, Alex.

Then one of my favorite memories came into view.
There was a fresh loaf of french bread sitting on Lorri's kitchen counter. It was hot and it sent off the most glorious aroma that filled the house. I was near it but I knew better than to get too close. Alex walked in and inhaled, closed his eyes and said "um" as he walked toward the loaf. Then he gently lifted the hot loaf of bread to his cheek, eyes closed as he gently caressed it, "I love your bread" he said and then put it back on the counter.

Now Alex can eat all the bread he wants. There are no carbs in Heaven.

It's hard to put into words what I feel but in a nutshell, I think I realized,

Life makes you feel entitled but death makes you regret and appreciate.

At Alex's funeral I drank wine, laughed and cried with friends I had lost touch with or had alienated with my aggressive politics on Facebook.
We were all raw open wounds reaching for each other.
Walls came down.
Fears dropped.
Forgiveness and grace filled every space.

That's when I realized being political on Facebook was bullshit! It destroys friendships, family relations and it's pointless noise that only hurts the ones closest to me.

It's not worth it.

I am a very contemplative person. I think about the why's and why not's of everything, all the time. I'm seriously hard headed too.
I feel like I can influence people.
I feel like I should influence people.
Sometime I feel I will burst if I don't.
Facebook seemed like the perfect platform to do this.
To reach across lines, across cities and states, make instant contact with information, sharing immediately what I feel everyone needs to know.

THAT is the bullshit I finally saw from Alex dying.

The light came on.

The actual, face to face embrace, the handshake, the conversations, are what's real. It has to be. The alternative is a smoke and mirrors haunted house that traps me, fools me and tries to fool everyone else.

Alex was a grown young man but he was also Lorri and Pat's child. He was a brother to Israel, John, Ryan and Jordan. He was friends with my Evangeline, Daurie's Hannah, Kristy's Brennan, Becca and Bayleigh. Even though we hadn't seen him in several years, he was like family to us because he was part of this family I love, birthed by a friend I love dearly, and part of our lives for many years before they moved in 2009.

In grieving the loss of Alex I saw how I was responsible for digging the canyon between me and the people I have so much history with and much more in common with than what divides us politically.

Today the grief is near.

And at the same time today the gratitude for the bonds that can't be broken by meaningless bullshit are also near.