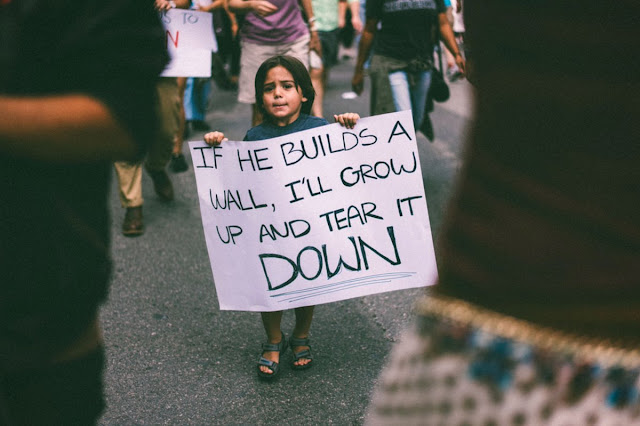 I've awoken every morning since the election in full on grief. I am terrified that president elect Donald Trump will be and do everything he presented on the campaign trail. I am terrified of what will become of our country. I do honestly fear that our Democracy cannot survive a fascist, authoritarian, isolationist president.

So far though, Trump has continued to show himself as he did during the campaign to be a racist buffoon who's already put an Alt-right racist in as his chief advisor.

But hey, my fellow believers in Christ, be encouraged, at least he's pro-life right?

Trump is like an American Hitler and the American Church put him in office. Of course they had help from fake news outlets that fueled fear voters, the web sites that pushed conspiracy theories so intellectually lazy people could read them and feel informed, the white supremacist and FOX news.

Thanks to them, Donald Trump is now America's president elect. It's still very surreal, that I am typing these words is still unimaginable to me.

They were never under any illusions that Donald Trump was one of them,” said Ralph Reed. “And, by the way, they never asked him to be. All they asked was that he shared their issues agenda and that he would fight for it. … He persuaded them on both of those points.”


Carol Swayze, an evangelical Christian from suburban Atlanta, said: “Nobody thinks he’s a saint and we’re not voting for the pastor in chief.”


“We’re voting for a president who’s really in a lot of ways a manager,” she said. “I think for a lot of us, the issue of sanctity of life was paramount. … We felt like Trump was very honest about his evolution in his understanding of that issue.”


Abortion tops the concerns of many Christian conservatives..

The most gut wrenching aspect of Trump being elected president to me is that American Evangelicals voted for him by over 70%. That means people who profess to love God and to believe his word where it says to "love God with all your heart soul and mind and love your neighbor as yourself" those people thought a man who verbally assaulted women, mocked the disabled, calls for refusing refuges...and I could go on but it's everything we all know and it's everything Trump voters didn't care about, they still voted for him. Christians care more about having Pro-life supreme court judges than they do refugees, women's rights, bullying, America being globally mocked,discrimination against minorities, Trumps relationship with Putin, etc, NOTHING is as important to Republi-christians as having a president who supports their agenda.

They don't see him as Hitler.
They see him as a means to an end or worse, a hero saving them from terrorist (refuges), a liberal government and four more years of Obamacare.

I'm embarrassed to tell this story, but I feel I must. I once voted for a horrific racist person simply because he was a Republican who claimed to be pro-life. In the Governors race of 1990 I voted for David Duke. Yes, great shame comes over me when I admit that. He was running for governor against Democrat Edwin Edwards. Edwards was a known crook and against everything my Christianity at the time told me I was for. I was of the mind set that any Republican was better than a Democrat. That was back when I went to church 3 to 4 times a week, and I spent my evenings reading John Burch society news letters and National Review, my lunches listening to Rush Limbaugh. I was s a Right-wing Christian conspiracy kool-aide drinker blinded by self-righteousness and brainwashed by preachers pedaling the gospel of politics.

But I will never forget being at work one day after the election, everyone knew I was a Christian, one of my black coworkers ask me who I voted for and I told her. At that moment, and I can still see her face, I realized what I thought was just a way to get a pro-life Governor, was to her an unimaginable evil. It hurts me now to remember my smugness and assurance that certainly God didn't want a pro-choice Democrat as our governor. God would definitely choose the former head of the KKK over a Democrat.

I had been duped.

The Christians who voted for Trump in this election have also been duped. Only, their candidate won and now he is the most powerful person in the free world.

More than anything, I hope I am wrong about Trump. I want to be wrong so bad. He can be conservative, I could live with that, but he can't be an Alt-right, authoritarian fascist or he will get a revolution all right, it just wont be the kind he was expecting.

More than half of America did NOT vote for him, they do not want him to be president, and if he tries to destroy our country, if he is as awful as the words he has spoken and his previous actions have shown, I will stand up to him.

"People are tired of working longer hours for lower wages, of seeing decent paying jobs go to China and other low-wage countries, of billionaires not paying any federal income taxes and of not being able to afford a college education for their kids, All while the very rich become much richer. To the degree that Mr. Trump is serious about pursuing policies that improve the lives of working families in this country, I and other progressives are prepared to work with him. However, if Trump pursues racist, sexist, xenophobic and anti-environment policies we will vigorously oppose him."