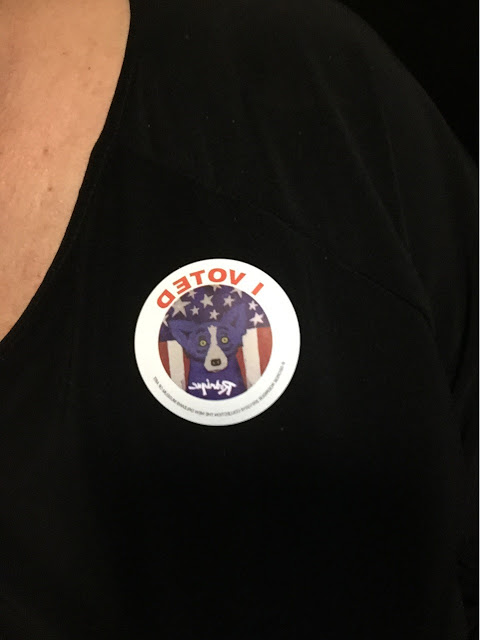 I voted yesterday. There was even a little bit of a line to vote. I never early voted before so I wasn't sure what to expect.

Voting for Hillary here in Louisiana is said to be useless, I keep hearing that my vote doesn't matter because Louisiana is such a red state. We voted 58% for the Republican candidate in the last two presidential elections. Our state only accounts for 3% of the total electorates to win the Presidency, the latest polls show Trump at 49% here to Hillary's 35%.

But imagine if all the people voted, who believe their vote doesn't matter. What if all the Trump supporters here stayed home because they were so confident in their lead? What if the 51% of this state that are women all came out and voted? Not saying they would all be for Hillary but it would change the political landscape of our state certainly.
And to anyone who assumes that Hillary will win based on what the news is saying, don't rest on that. Trump was laughed at by every pundit and media outlet when he got in the race, but he beat out good decent candidates to be the Republican nominee. We can't count him out. I wouldn't be shocked really if he won.

That would be awful but not shocking...especially if everyone doesn't vote.
It's time for America to vote in the mamma's and the grandmas so we can take a shot at getting this place in tip-top shape. We gals definitely have what it takes and you know it. From Caroline Fayard running for Senate here in Louisiana to Sharon Westen Broome running for Mayor of Baton Rouge. All of you who say how screwed up our country is, maybe it's time for a different perspective in the halls of leadership, a female perspective.
And in the white house, we don't need Trump and his one man bully-freak show, we need the woman who stood up to him, went toe to toe with him and refused to let him bully her. I love that she is a fighter, and she fights with her intellect, wit and maturity. I believe she will fight for America and against bigotry, hatred, otherness, isolationism, fear and racism.

She's nasty in the finest sense of the word and thank the lord, nasty women get shit done!