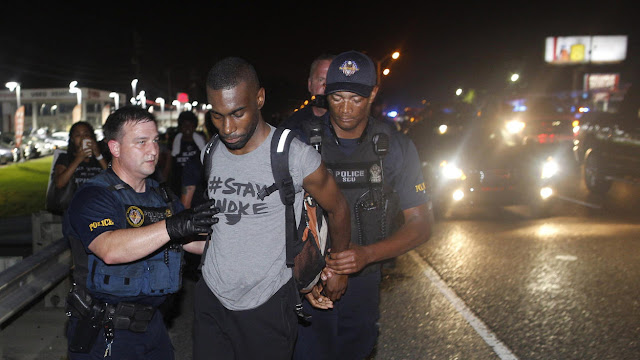 Here's what I know about the arrest at the protests here in Baton Rouge;

Protest sites were predetermined by local activist and police. National Civil Rights activist, DeRay Mckesson came in town with the intent of taking the protest to interstate 12. They wanted to block the interstate like protest have in Atlanta and other cities. When they started walking toward the interstate, away from the designated protest area, along the side of busy Airline Highway, he was arrested.

Now I have no problem with protest that cross the line legally, I've said that before. It would not have been legal for them to block the interstate. It wasn't legal for me to crawl under a barricade onto private property and through a field resisting arrest by going limp when officers tried to arrest me. As I've said before, that is the nature of protesting, going up to and crossing the legal line sometime. BUT if you are a nationally recognized civil rights activist and you speak to the media saying "we were just peacefully protesting and walking and I was arrested for no reason." without including "but I was leading a group toward the interstate, we were heading to the interstate to block it, and we were walking on the side of a busy highway away from the designated protest area so we were breaking the law by creating a traffic hazard and we were on our way to also break the law by obstructing the interstate so, yeah, I can see why they arrested me."

Again, let me be clear, I have no problem with any of that ACTIVITY or their goal. BUT what I have a problem with is DeRay portraying himself as the victim of the police as if he was unjustly arrested. I don't know if he relayed his intentions (of going to block the interstate) to the police but they knew as we all did because of social media, the crowd talking to each other and they were actually walking to the interstate.

SO Deray Mckesson, why not say that? Why not be completely honest?

Same with the situation on Government street where, I think it was 40 people, were arrested. The crowd gathered with the goal of working their way to the interstate to block it. Police said multiple times over loud speakers, "you are unlawfully assembled, you do not have a permit to protest here, you must disperse immediately" but they didn't.

When some protestors were asked by reporters they said that was their goal, to get to and block the interstate. So, again, that is illegal, you will get arrested. You are not the victim, you are breaking the law.

If I didn't have to work, have kids, my butt would be with ya'll, working my way to the interstate, risking getting arrested and If I did get arrested, I would not be ashamed to say why. Civil disobedience is a hallmark of change in this country, but you get arrested for it.

It just kinda chaps my hide that national civil rights leaders like DeRay wouldn't be COMPLETELY honest about the situation. Why give more reason for people to hate the police? Why paint a false picture of them when they are hurting as well right now? They are fearful because a crazy man just opened fire on police at a protest. Why make everything worse by deceiving?

Protest, demonstrate, be loud, demand change, break the law but don't lie and deceive. The end does not justify the means. Your cause is damaged when you mislead followers to make yourself more famous or more needed.

Thanks how I see it.

If I am wrong here, if someone has more insight or info, please, let me know.
Activism America Politics protest