The Toxic Cesspool We Love 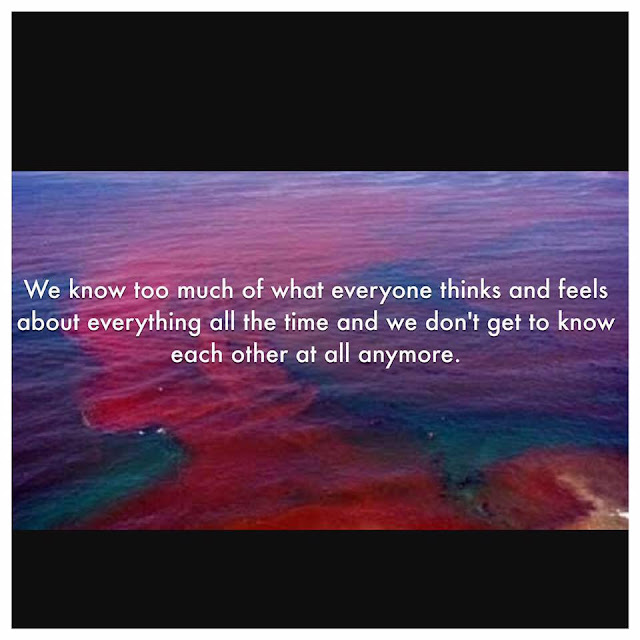 Pondering this social media world we live in, can't seem to escape...

Someone plagiarized a blog post of mine one time, pissed me off. They used a post word for word and just added to it. When I called them on it they acted unaware.

Another person has set themselves up as an expert on everything and people have bought it online, hook line and sinker. They are always in the frey, stirring the pot, crashing everyone's party all under the guise of expert activism.

I see men posting family pics and glowing couple shots with the wife who moved out almost a year ago, all to paint an untrue picture for the masses.

Trolls harassing people like Leslie Jones to the point of her leaving Twitter all together. But the bullies actions get defended as free speech because it's on the Internet. What is this Matrix we are drowning in? We can say anything to or about another person, broadcast hate and ridicule directed at a person because it's the Internet?

We can make up realities that don't exist? Say things about others that aren't true? In this matrix all we have to do is convince others it's true. Because isn't it only real if others see it and believe it?

I use to think Facebook was like the water cooler at work, you know, that place where we would come to in the morning to share opinions on social issues, show off pics of our kids, discuss the news and then go on about our day.

But it's not. When people gathered around a water cooler at work they were looking at each other in human form. Disagreeing but seeing and hearing each other as people, real flesh and blood people. Crafting the perfect alternate reality was harder in a face to face world.

It's too easy to fake it now, make ourselves look better than we are. And it's easy to let the worst demons of our nature spew whatever is in the darkest parts of our hearts. Anger is easy when it's directed to a screen, not said with our mouth to someone while looking them in the eye.

Judgement is swift and exacting.

We know too much of what everyone thinks and feels about everything all the time and we don't get to know each other at all anymore.

My phone was broken for two days and I felt like an addict in rehab. I felt free and that freedom would have driven me mad had it gone on much longer.

I can't play this game like a pro because it's not a nice game. I want to tell everyone who follows the faker, "Everything they post is bullshit! Spend a day with them, five minutes even, you'll see." But then that's petty and wrong.

This isn't a water cooler, it's a toxic ocean of waste that we daily wade out into, drinking it, letting it seep into our pores, letting it bath us in it's unholy brown and black muck. We float in it until we become accustomed to and then no longer smell the stench. We come out reeking and covered in waste and we touch everything around us with our shit covered hands.

"You can check out anytime you like but you can never leave."
America blogging social media writing