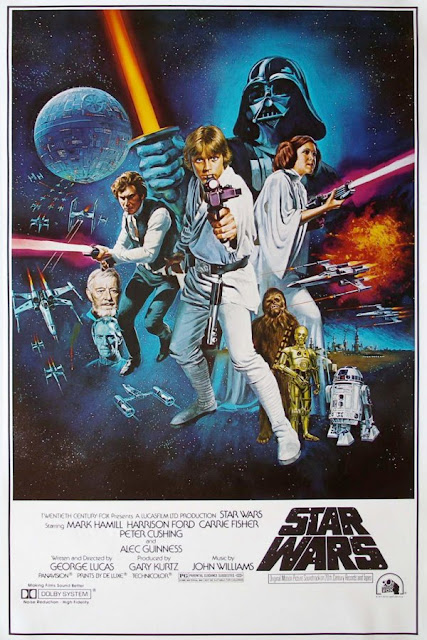 It was the summer of 1977. My sister Donna and I were visiting my dad. Neither of us liked science fiction, mainly because our grandmother watched Star Trec every night at 7pm on the only TV in the house, so we were forced to watch it.

My dad told us we were going to the movies to see Star Wars. He was so excited, and you could tell he was thrilled for us. He'd already seen it once.

We were not thrilled.

We thought it would be like Star Trec, and we had enough Star Trec to last us a lifetime, and we were only 10 and 11 years old.

We were late getting to the theater, so we had to sit all the way down front on the first row. I started complaining before we got there, and now I was really complaining. Not only did I have to watch, what I thought was going to be a two-hour version of a show I hated, but now I was gonna have to do it sitting too close and looking up to where my neck would hurt!

Oh, the misery I was anticipating.

Donna sat quietly, holding in her complaints as she usually did.

"Carole, you're gonna love it, trust me." My dad was beaming with excitement and confidence.

The words scrolled up and away from us over the pitch-black vastness of space... "In a galaxy far, far away.."

I tried to hate it but to no avail.

It was Star Wars.

I never became a super fan like with Lord of the Rings, but I was and still am a fan. I even liked the more recent ones with Hayden Christiensen, mainly because he's eye candy but also because I thought he was a great Anakin, and he's adorable.

When I heard they were making new ones, I was skeptical, "Again?" I thought and not in a good way. But over time, I began to get excited about this new crop of Star Wars movies.

I have fallen for the hype, I guess.

Now that the time is finally here, I'm excited to see the new one. I LOVE Adam Driver from Girls and Gwendoline Christie because of Game of Thrones, so I can't wait to see them in this. And, of course, it will be great to see Chewbacca, Han, and Leia again.

I hope it lives up to the hype.

Because this weekend, I will make some new memories with my kids watching Star Wars as my dad did with us watching the original.
family Finger Nail Droppings movies