He Chooses Flight Over Fight 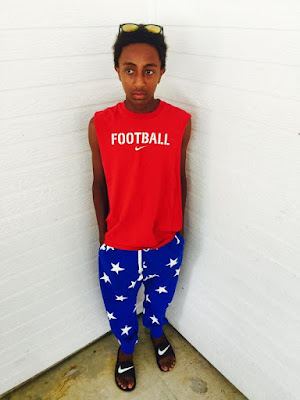 Our son Abel ran away from school yesterday at 1pm.

Since I blasted social media asking for help finding him, some people have asked why he ran away, so here's the story.

Last year I received notes home from Abel's teacher's at least once a week if not more. He was written up a few times, and one time he had to do Saturday detention for hitting a kid in the bathroom.

This year started better but over the last couple of weeks, his behavior had deteriorated.

Yesterday I get a call from Coach Stutzman, the ISSP (In School Suspension Principal) that Abel walked off Cafeteria duty (which he'd been assigned for a previous infraction) and then when asked by the principle why he wasn't doing his duty, he told Coach that he just didn't want to. So Couch Stutzman was calling to let me know Abel would have after school detention next week.

This was the fourth write up in 8 days.

So I asked Couch if I could come meet with him to talk about what may be going on with Abel and figure out what we should do at home.

Our meeting was set for 1pm.

Dean and I get to the school, meet with the coach, he tells us "don't burn down the house on these write ups, he's a good kid, 7th grade is rough.." etc. We all feel encouraged after the meeting, and like we have a handle on what the appropriate action is, then Dean and I leave.

We aren't 10 minutes away when coach calls to tell us that Abel has ran away from school. A janitor who had left the school to run an errand, saw him on the road behind the school.

The police go to the house of each child he knows or hangs out with, that lives anywhere near the school. They hear reports that he's been seen cutting through fields but still can't find him.

His information gets filed with the national missing persons listing.

I've been instructed to wait at my house in case he comes home. I am still frantically texting everyone I can think of in my area, still blasting social media. My phone is blowing up. I couldn't answer everyone. I had to leave the line open for calls with information.

Of course like an angel, Hope Boutte shows up just to be there with me so I wouldn't be alone freaking out. ( She even bought us all dinner!)

I get a call around 5:30pm from a lady who says she saw on social media he was missing and that her daughter had found his ipad in their yard around 2:45pm. I told her to look around her house and yard because he might be hiding somewhere.

She replied, "Oh, so you don't think he's been kidnapped and just left the ipad behind?"

"Uh, well no, as his mother I'm just not going there right now. I believe he's just hiding somewhere."

He is an expert hider. He likes that, since he's black, he can hide in dark places and not be seen.

I call Dean, him and a police officer head over to her house to get the ipad. Then 10 minutes later the phone rings, "Hello is this Mrs. Turner? I have your son Abel here at my house. He's fine. I've been talking to him, trying to convince him not to run anymore."

I get her address, Hope gives it to Dean and he heads that way. The police go too.

We were all so relieved he was found and ok.

When the police arrived at the ladies house, he was arrested for running away. He ran away one time before for a few hours but he was just hiding behind the fence next door. Our dog Bella had sniffed him out that time.

But even then, the police told us it was against the law for him to run away. I had no idea.

He has a court date on December 3rd. I don't know what the school will do since he left school campus and police had to be involved. I guess we will find that out today.

But God was looking out for him. Abel had jumped the ladies fence and was trying to hide in her back yard, her 8 year old son ran in and told her there was a black man hiding in the back yard. She came out and pointed a gun at him, "You have any weapons? Drop your bag!" She could have shot him and been at no fault. When he answered "no", she talked to him calmly, convinced him to stop running and gave him some counseling. He had landed in the yard of a licensed social worker 😊

She told me that the minute she saw him she knew he was just a scared child. She also said she would recommend a few counselors for us to see.

He said he was hiding n a huge oak tree for about an hour and he watched all of us looking for him. He said he didn't really have a plan he just felt like he wanted to run away from getting into more trouble. Which in reality only got him in more trouble.

Nothing prepares you for parenting children from hard places. I've read all the books, watched the seminars, completed to work books. We've all gone to counseling off and on over the 6 1/2 years that we've had Abel. Everything I have ever been told about parenting, has been challenged. Everything I've seen, all the experts, what they say to do, I've tried. But we can't force Abel to change his reaction to fear and stress. If we try to talk to him he retreats into himself, which is "flight". When he thinks he's going to be in trouble he does the same, and like yesterday, when he thinks the trouble is just too much to handle, he takes to physical flight. He always chooses flight, has never chosen to fight.

Lately, since I've been on the Welbutrin, I don't freak out as much on the kids. I'm much more even keel now, not completely calm of course, but much better. Even with Abel getting in trouble several times lately, I've not freaked out. But there's only so much punishment we can dish out to him when he keeps piling on offenses. Dean made him wear Evangeline's white Velcro shoes to school yesterday because one of his offenses was writing "It sucks dick" on a paper that was being passed around the class room for kids to write what they thought about the book Tangerine. He wrote that to be cool to the kids sitting with him and to make them laugh so Dean decided he would wear some very NOT cool shoes to school. But, that was another thing we found out yesterday he had disobeyed, he had changed his shoes once I left the house and wore his KD's instead. So even with being creative, its as if nothing has an effect or he just does what he wants anyway. Very much a typical teen but having conversations with him about any of this is not possible. He completely shuts down and starts regurgitating back to us what we say to him or what he thinks we want to hear.

This is flight. He wont fight for even his own sake. He only knows how to run inside himself or away.

So needless to say, Dean and I stay frustrated. Which is displayed in being short with him, not having as much patience with him, feeling like he doesn't want to connect at all builds resentment and mistrust. I told Dean yesterday that I feel like I fail at parenting him 90% of the time.

But I don't fly. I fight. Which is probably why him and I clash so much but it's also why I will not give up on him. I just don't have it in me to not fight like Hell to make our family work. He is a part of our family, he is a good kid with a kind heart. He is hard working and I love him. I love that kid. It's different yes, I wont lie about that, but it's real and I believe we can do this. I am always willing to change and work harder on being a better mom. I judge myself the hardest, believe me. If we can ever get him to not resort to flight any time he feels like he just can't deal with reality, well, that will be something for sure.
Email Post
Labels: Africa family Junior High Conversations Orphans social media