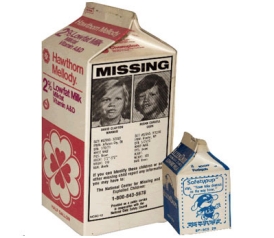 An Amber Alert post a missing child's picture on TV stations and now on lighted highway signs around the country. As soon as a child is reported missing the police send a report to the National Missing Persons Registry . The information that is sent nation wide is a picture of the child with a description and where/who they were last seen with.

I recall a few weeks ago, a grandmother and her grandson were reported missing from near where I live. They were found later that day thanks to all of their information being plastered all over TV and Social Media. As soon as I saw the post on Facebook I immediately shared it so did thousands of other people.

A couple of years ago I saw a Facebook post by a man I know who was trying to find his daughter who had run away from home. People shared his post, some were messaging him, some had spotted her, some had heard from her and eventually she was found and safe at home.

When the school called me and said Abel ran away, I remembered how effective his use of social media had been so I decided to do the same.

Since Abel ran away from the school, they had already called the police and started an active investigation. His information was already on the national missing persons hot line.

After Able was safe at home I wrote a blog post telling why he ran away. In it I shared the struggles we have communicating and connecting as a family. My children read my blog and they know what I post. If they ever have a problem with a post, I hear them and most of the time I will take the post down. But not always because this is not only their family, it is mine too. Our stories are intertwined, I get to write about my life and I feel it is important too. I don't believe in shaming my children but I also don't believe that telling our struggles publicly is shaming them. I believe that sharing our story will help others who may be going through the same struggles. I think it's healthy to be open not secretive about parenting although, parents are the most judgmental of each other.

Looking at news stories over the years about abused adopted children, It looks as if secrecy, isolation and a feeling of "no one will understand" or "we don't need anyone to know our business" was much more at play in the demise of those families and sometime in the deaths of children than being open and honest about what was going on inside the home was. Over all I'd say adoptive families are hurting more from the pervasive feeling that no one else is going through what you are and no one will understand. Maybe if more families talked openly about the real life struggles it would result in healthier adoptions over all.

I don't believe my child's privacy is more important than putting his information out there so he can be found and returned home safely. It's the same thing the police do to find them, the same thing the Amber Alert network and the National Missing Children's Hotline does. When time is of the essence, as it is when a child runs away or is missing, it's not an invasion of a child's privacy to broadcast their picture, description and any other information that would help find them.

I think God for social media. I don't have a mass following but when friends of friends are posting Abel's info and it spreads like wild fire, I realize that for all the down sides and critiques, social media is a great place to get the word out fast in an emergency.

Social media is the new, much improved, milk carton.
Adoption family My issues