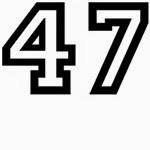 Many of you (like, what, 2 or 3 at the most) have asked why the number 47 is so significant to me. Why did I get (what I thought was but turned out not to be) the number 47 in Elvish tattooed on my hip? Why is this birthday coming up on Sunday such a big deal?

Well, during the Swaggart years and into the early '90s, the group of guys I hung out with (Karen, Ammye, and Paige were the only girls REALLY. We were their Elaine; they were our Jerry, George, Kramer ;-) this group adapted the number 47 because, well let me just have Jimmy Clyde explain it to you, as he did to me several years back...

47 is not just a number. It is a state of Shank being. It is all around us. We need only open our eyes and see it.

It is ever guiding the Shanks. Ever gooping.

It combines two biblical numbers of perfections: 40 and 7.

It was also the exact number of days that was required for Jerway to, once he stopped shaving, begin forming that cheesy mustache he sported in High school.

It was the model year of Wade's Acura.

It was the number of times Keevo enrolled in Brief Calculus at LSU.

It was David La Fleur's number.

It was the number of times Chadly inserted foot in mouth...his freshman year. It was also the exact height of Sammy Martin's bicycle that ran over Chadly.

It was, of course, always the number of things Keevo had to do that made him late for...well, pretty much every event.

It always seemed to be the deposit money needed for our Perdido Key trip.

It was the exact number of times Jelly swore he'd never squirt anyone again with his 240sx's windshield washers as he was chased by some angry LSU frat boys.

It was also the exact number of people victimized by Jelly's windshield washers the following weekend.

Coincidence? I think not.


Stay tuned; next up on the blog, I will tell the "47" in Elvish tattoo story (again) as we countdown to turning 47 on Sunday!

In the meantime, check out The 47 Society. Totally unrelated to any of us that adapted this number back in the late '80s but still, check it out, see how there is something to this whole "47 is the best number" thing not just with us but with THE WORLD! :-)
47 Finger Nail Droppings Humorous History