What I Thought About the Book, The Child Catchers 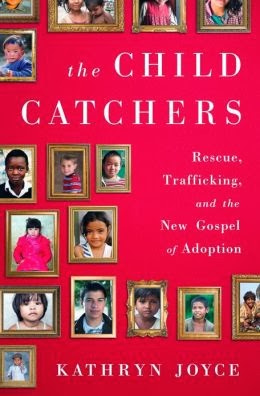 This is one of those blog post I find quite hard to write. I have so many thoughts concerning this book, I'm finding it difficult to get them in order so as to write them down coherently but I'm gonna try.

Two of our children are adopted, we adopted Steele at-birth domestically in 2004, Abel we adopted in 2009, from Ethiopia, when he was six. I AM who she writes about in this book. A Christian who became part of the Orphan Care Movement. But I'm also the infertile, Evangeline was our miracle of birth, our boys, miracles of adoption. So, this book hit home for me. Literally.

When I first started reading I was having a hard time getting through it, not because it wasn't an interesting read but because it was making me so mad. She said everything as if she was building her case in a court of law against Christian adoption.

"Well, yea, when you say it like that, it does sound bad" was my reaction to almost everything I read in the first half of the book. She put every Christian term or phrase in quotations, she wanted it to be very clear that she didn't believe any of the feelings, leanings, callings, expressed by people as their motivation for adopting.

I was mad but I also agreed with a lot of what she was saying. I KNEW more of it was true then should be true. Many of the concerns she was addressing, many of the blind spots in the movement, I had blogged about or discussed with other adoptive families. So though it was making me mad reading the constant barrage of accusations and case building against something I was actually a part of, I couldn't stop reading.

Her biggest issue with Christian adoption, and what she worked hard to expose, was the use of adoption to evangelize, the belief within the movement that adoption is the answer to the orphan crisis, the prevalent savior complex of the movement and how it is actually worsening the plight of orphans rather then helping them.

As she built her case with facts, statistics, quotes and stories of tragic results, I found myself agreeing with her more and more. She made valid points and near the end of the book, she starts writing about those within the Orphan Care movement who are actually seeing the same problems and trying to change things.

I've long since had strong opinions about some of the issues she raised in the book. I've blogged about them, but I'll give you all a few of my thoughts in a nutshell.

NO ONE should be able to profit from adoption. Birth moms should not be compensated for giving up a child. If they want to do it, it should be covered under insurance, all of her expenses but no more or no less.  A lawyer should have to do all adoption related work pro-bono with a special tax exemption and/or tax credit given for such work and agencies should be non profits, receiving grants for funding, no fees to clients, none profit.

No birth mother should ever be pressured, or overly encouraged to give her child up for adoption. I have asked ladies before, "What are your plans?" and if they said adoption, I told them I would be there to support them whatever they decided. I don't believe just because a woman is single, poor, etc, she should feel any more obligated to give her child away then any other mother.

Mothers should be allowed to drop off a new born at a hospital, no questions asked, in every state, if they decided they can't parent their baby and would like to give them up for adoption.

I'm being simplistic for the sake of space in this blog post, but I've actually given these ideas a lot of thought, I believe they could work.  Organizations like Bethany Christian Services are huge money making industries and this should not be. Children are not commodities. When you can inquire at an adoption agency, and they tell you a black or non white baby is cheaper to adopt then a white baby, you know right away, something is terribly wrong with how adoption works. When a woman can make a living by selling her unborn children to desperate families wanting to adopt, willing to pay for housing, food, computers, phones, and pad a bank account all under the legal guise of "birth-mother support" it's more then obvious something has to change. I believe the adoption industry needs to be completely revamped and the money removed from it.

Again, same as with domestic adoptions, profiting financially should be removed from the equation.  In foreign countries especially, there has to be a way to remove money making from orphan care.

I believe taking care of orphans is a humanitarian effort. It's holistic, but I only gained enough knowledge and insight into orphan care after having gone to Ethiopia to adopt, being a part of the Christian orphan care movement and working with birth mothers. Over time I started to see things that hurt my heart. I saw the mistakes in my own philosophy, I saw the error in what I had been taught or led to believe about the number of orphans, what counts as an orphan, what is really the best way to care for orphans, what is the best way to solve the poverty issue which is really why most children are in orphanages around the world.

It is time for serious reform. The money is what drives the adoption industry world wide, not the good hearts of believers wanting to make a difference. They actually are pawns in this scheme. I was a pawn in this scheme because we wanted to help and the movement, until recently focused primarily on adoption as the answer, adoption as the way to help orphans, adoption as the savior of these "poor kids being raised in godless environments" adoption as a way to do what Jesus said, "take care of the widows and orphans.." and solve what we believe is a crisis in the world. BUT adoption is not the first answer and even the Christian orphan care movement is starting to see this.

That's one thing I love about the body of Christ, we are jacked up, we get over zealous and leap before we look, our intentions take us on crusades, send us to protest abortion clinics, make us invest in TV evangelist, and all other forms of wanting to do right. In our zeal we form plans based on very little insight, we start spinning tales of the future and what we KNOW we will accomplish if we just ____ fill in the blank. It's timeless because we are human, we believe our leaders, we follow them and most of them are honestly seeking God and wanting to lead their people rightly but they, like us are flawed humans non the less. And as Christians our history with zeal is more off then on the right track. Yes, we get back, by the grace of God, he pulls us back but we do a lot of damage in the mean time.

Many leaders within the movement have already started to see and make changes. Many are not taking the victim mentality, but rather prayerfully looking at the issues she raised and asking for wisdom and guidance on how to take a more holistic approach to orphan care rather then leading the church to believe adoption is the best option without exception.

I recommend reading this book if you care about orphans and want to care for them properly, if you are a Christian within the orphan care movement and want to be challenged, this book will piss you off probably as it did me, but it will also give you so much needed insight and wisdom into how what we do effects those we are wanting to help. That wisdom is crucial. We should strive to be Jesus to all people involved in the plight of the orphan. To look at this very complex issue through His eyes of love for everyone, not through over zealous eyes of a savior complex. This book is a rebuke and it stung,  but I'm glad for it and I think it will make us better at caring for the least of these if we take the rebuke to heart and work to change the way we do things.