In a New York Minute Everything Can Change

October 08, 2013
It was a Tuesday I think, I was at the Dream Center, I had come to help with some Vacation Bible School stuff,

"James Windom just found out he got a big grant, it's not an HP Serve grant, it's through Department of Labor, he has to hire a bunch of people." Hope told me.

I saw James later that day going into his office there, "Hey Mr. James. I heard you got a big grant, is there a position you think I could apply for?" I asked.

"Yes", he said as he pointed at me in that 'you just said something I like' kind of way, "put in for one of the Case Managers, send me your resume."

"Thanks! I will!" I replied as he turned on his heals back into his office where a client was waiting to resume their conversation with him. 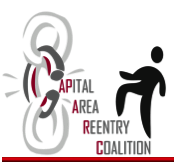 That was in July, I've been going to staff meetings every Monday since last month, next week I officially start working as a paid staff member of CAPARC (Capital Area Reentry Coalition) and can I say, this has not come a moment to soon.

We have really struggled over the last 6 or so months financially, I tried living the dream but my art just doesn't sell and there hasn't been an over abundance of movie extra work lately either. I quite literally applied for 5-20 jobs a day for months. I started to ask "what's wrong with me?"

But in that New York Minute everything changed.

Today the CAPARC staff went to visit a reentry one stop in Lafayette, all of us ladies road together, and as we talked I heard of the divine appointments that put us all at the right place at the right time to now be in that vehicle at that moment.

I heard about all of their New York Minutes, when everything changed.

But I can't talk about my new job without also mentioning Dean's promotion. After 15 years with Coca Cola, my hard working man got a really great promotion. He's now the Bulk Manager for Baton Rouge Coca Cola. I'm so proud of him.

We have yet to celebrate his promotion or my new job properly, again because we just don't have the money too yet, but we will, we will.