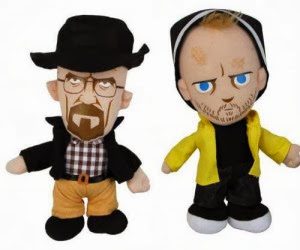 Breaking Bad
I've been binging on Breaking Bad for the last two weeks. I was trying to catch up so I could enjoy the finale Sunday night along with the rest of the world. I didn't make it. I finished tonight,  after literally sitting and watching back to back episodes all day long today. I cleaned house, did laundry, sorted papers into a binder for work, all while watching season 5 of Breaking Bad. I'm sad it's over but glad also. My family needs me.

I have stayed away from any analysis of the show, about the spirituality of it or the psychology behind the show. I'll read up on all of that tomorrow after I write my thoughts. But to me, I believe there are a few reasons why this show was so popular.

First; it wasn't predictable. Usually when you expected one thing to happen, something else happened and that made for very interesting TV.

Second; since in was on A&E it played more freely. What I mean is, on network TV there is more caution, more structure, there is more of a set idea of "what works" but on networks like A&E, when they started shows like Breaking Bad, Mad Men and The Walking Dead, they had less to lose so they allowed more adventurous, more creative, risky shows to come alive on the network. I think people could sense this when they watched these shows.

Third; the actors who brought the characters to life. Wow. Seriously, they were all amazing. And again, I think these actors were given more freedom, they were more relaxed because they weren't having to jump through the major networks hoops (this is not an expert opinion, more of a guess really).  My favorite is Aaron Paul as Jesse and Anna Gunn as Skyler, they made the show if you ask me. But I also loved Hank and Marie, and Gus was so bad and Mike and of course, Mr. White. They really were all perfect.

Morally I saw Breaking Bad as a perfect example of how we can lie to ourselves to justify our actions but that only bides us so much time. "He can't keep getting away with it!!!" Jesse screams through tears. Man that was a great scene.

I could go on and on about it but suffice it to say, the terms "Yea B!%ch" and "Yo" will never sound the same to me again.

ObamaCare
All I'm going to say about this now is, let's revisit in a year or maybe two. Something as huge as this can either be as bad as the tea-party peeps think it will be or it could turn out to be a really good thing like the Democrats think. Either way, it will take time to see the results. Right now the bugs being worked out will take a while, everyone learning how to work the new system and the adjustment period, will be confusing and difficult, So I'm gonna wait to jump on either train right now. I lean more toward thinking it's a good thing that will take a while to show good fruit, but I'm not completely convinced of this, part of me is skeptical the government can pull this off, so like I said, we'll see.

And speaking of Obamacare...

Homemade Moisturizer
Enough politics, most of you are ticked off at me now and wonder how I even claim to be a Christian. So lets talk moisturizer. Last year around summer time I bought a very expensive Mary Kay facial system for older ladies like myself. Around the same time I started having extra watery eyes. My eyes have always watered some due to allergies, but they got much worse and I'd occasionally get a rash around my eyes. I've since been on several medications with only mild relief.

The other day I noticed the scaly rash was returning around my eyes so I started applying extra eye cream, the eye cream that I've been using every morning and evening, all year long that came with my Mary Kay facial system. The rash continued to get worse.

A few months back my friend Donna Clyde had given me some homemade moisturizer that she made. I was using it during the day but still using my Mary Kay stuff at night and still using the Mary Kay eye cream every morning and night. But then it dawned on me to try stopping the use of all the Mary Kay stuff and try just using the homemade moisturizer on my face and around my eyes to see if it gets better. Sure enough, after only one day, I'm seeing a marked improvement in both the watering of the eyes and the rash. I think all this time I was actually allergic to the Mary Kay facial system.

Thank God for friends who make their own moisturizer and give some to friends :-)