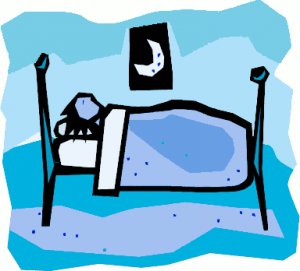 My relationship with sleep hasn't been good since I was 10 years old when a man my mom was briefly married to tried to molest me while I slept. So I became a light sleeper.

I get up several times a night to pee, get water, tell Dean to roll over and stop snoring. I've also had hot flashes and night sweats since I was a teen due to my crazy hormones.

In 1999 when Evangeline was diagnosed with type 1 diabetes at age 2, we entered the world of 2am blood sugar checks, lows during the night so I'd have to get her food, highs before bed so we would have to keep giving insulin every hour or two, seizures, etc.

I honestly can't remember the last time I slept all night without getting up...several times.When I did sleep for 6 or 8 hours straight I would wake up freaked out like something was wrong.

I have a very comfortable bed (Thanks Dad :-)  a nice steady sounding fan blowing, AC set to 67 (We use to set it to 69 before the hot flashes) Comfortable pillows, dark room. The stage is set for the sleep of a nighttime.

Evangeline is now off at college so I get up even more during the night to check where she is on the Find My iPhone ap and to see if I've received any frantic text from her friends concerning her (which happened just the other night but it was a false alarm thank God) She's gone into ICU twice since being at college because she is not taking care of her diabetes.

I had too much to drink one night a few weeks ago and Dean was mad at me about it. I had a complete breakdown when he asked why I had gotten so drunk. You know how alcohol is like truth serum? Well once I started confessing why I needed to escape sometime it was like a flood gate was opened. Every night I worry that Evangeline is going to die so I don't sleep. Her two recent stays in the ICU had made my not sleeping even worse. I was tired and overwhelmed. I am her mother and I couldn't just let her die. That is how I felt and once I started saying it, drunk, crying hysterically, well it was bad. When you don't sleep for 17 years it takes it's tole. My face was puffy the entire next day I had cried so much.

I read a post this morning on Beyond Type 1 Diabetes, a mother talking about how she doesn't sleep. The comments made me so sad. None of us sleep.

And there's no way I could sleep knowing that.

Read why A broken night's sleep is as bad as NONE This article makes a lot of sense to me.
Diabetes family My issues