"Oh no, I don't want to be caught DWB in Livingston Parish." My friend Josh said to me one Sunday as we talked about driving through the small parish just outside of Baton Rouge.

"Driving While Black" He explained.

We both snickered and gave each other that knowing look.

Josh is a 20 something black male with long braids. He's a college graduate. He drives a nice care. But no matter, in some areas here in the deep south, all they see is a guy in a car DWB and he is more then aware of this FACT.

Trayvon Martin was WWB, Walking While Black. He got shot by a man who I believe was scared, certain he was doing right, and of the same mind set as many. He shot Trayvon because he thought Trayvon was a thug, he was walking like a thug, he was in a neighborhood that had seen thugs breaking into homes, he was what we all fear, a young black male in a hoodie, so he was shot and he died.

If George Zimmerman had been a black man shooting a younger black male, no one would of cared. I dare say, not even the enraged civil rights activist who are so vocal right now. Because let's face it,  we are desensitized to black on black crime. The black community knows we don't care if they kill each other. The judicial system would of just thrown the older killer into jail for life,  no "stand your ground" law would have saved him and they would of chalked the death of the younger up to "thug life".

Don't act like you don't know this is the truth, think about it.

But the Zimmerman trial gave hope to the parents of young black boys, hope that maybe, finally, it would not be OK to kill our boys. But no. Last night that hope was shattered with a "Not Guilty" verdict for George Zimmerman.

I actually felt sorry for Zimmerman. I do believe it was a situation that got out of hand. He acted exactly like so many guys I know would have acted. His fear of the young black male got the best of him. I think he will forever be haunted by the "what if". What if he didn't have that gun? Maybe they both would'of left the scene beat up. Trayvon was obviously scared of this man following him. He reacted from that fear. What if he'd stayed in the vehicle and let the police handle the situation? He would be the hero maybe, Trayvon would be alive. So many what if's. 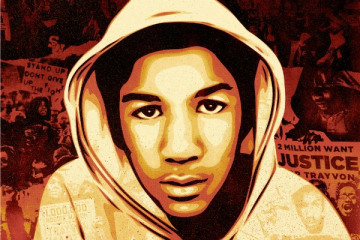 Abel has been mowing lawns in the neighborhood over the Summer. When he first started going home to home handing out fliers I told him to make sure to knock on the door and be very nice when people answered. I honestly feared for him walking up to people's doors and knocking. He's only 11 so that gave me comfort. He doesn't look like a man yet. God help him when he gets taller and more manly. He will be a part of the most feared group in America, the black man. Steele too, he's light but he will be classified by the masses as a black boy.

Will someone see them walking around the Dream Center in the notorious 70805 zip code and think they are a gang banger "just like all those boys" in that area? Will they approach our neighbors here in our suburban, mostly white neighborhood, to give them a flier and be feared by the white people inside? Will they induce fear and speculation simply for WWB?

No you say? Well, let me tell you a little story. Our daughter has a friend, a boy she use to hang around quite a bit, he recently started using extreme racist language on his twitter. He even asked "is it wrong to hate an entire race of people?" This kid lives just down the road, he has great God fearing parents and my black son is good friends with his younger brother. My black son goes to stay the night at this boys house. But now, I have to deal with the fact that this older brother talks of wanting Lil Wayne to die and asks if it's wrong to hate an entire race. Evangeline called him out on it, he laughed it off. How funny it must all be to him.

Evangeline has another friend, a girl, who's father told her flat out that she is to never date a black boy or he would disown her. This girl told us that her dad hates black people.  This is now. My world. My kids world. My black son's world.

I know people want to believe race is irrelevant but it's not. It's SO very relevant. It's not everything, but it is something whether we want it to be or not. As white Americans we need to realize that we do have the upper hand, we were the ones who enslaved hundreds of years ago, we were the ones who oppressed even 30 years ago, we are the ones who need to change our view. Yes, black people are racist too, but we should join the movement forward toward healing and equality instead of always saying "not me, not us.." Especially as Christian's we have to give grace to the idiots who honestly don't know better, to the young men who get caught up in racism as an identity, to the Anne Coulter's and the Al Sharpton's of the world who use the racial issues faced by others as a platform and a way to make headlines. We have to be willing to talk openly and honestly about race with black brothers and sisters who in turn give us grace for the stupid things we say or ask so as to learn.

I pray this verdict leads to more talking, more listening, a greater reach of understanding on all sides. I selfishly wish all this for my boys. I want them to be safe while DWB or WWB.
Adoption family Politics Race social media