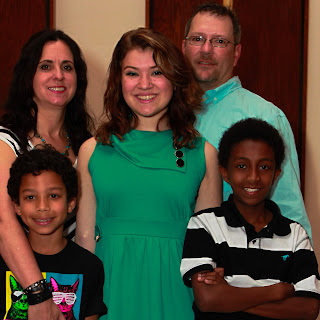 "Did his mom not want him?" I hear from the back of the van. The question directed to me from Steele's new friend Quinton who was sitting next to him. I had just picked Steele, Quinton, Abel, his friend Jonathan and Evangeline up from VBS at a near by church. They were all talking about Steele and Abel being adopted.

"His mom wanted him to have the best life possible and she felt she couldn't give that to him. She was only 20 years old, single, already had a 4 year old and was not making much money so she chose to let us be Steele's parents. She knew we wanted a little brown boy because I couldn't have any more kids." (she worked for my sister and knew our situation).

"What about Abel?" Quinton continued.

"His mother and father died when he was a baby and his grandmother was raising him and a lot of other kids but she had to work and all of the other kids were old enough to take care of themselves while she worked but Abel wasn't so she had to make a hard choice, she was getting old and couldn't care for him anymore, so we became his parents when he was 6."


That satisfied his curiosity, the conversation changed and I exhaled.

"How was that?" I whispered to Evangeline who was sitting by me in the front seat.

"Good." She said and smiled at me.
Adoption Family Pictures Orphans