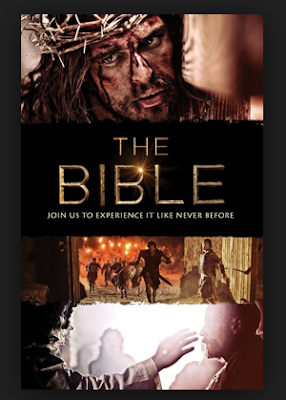 We sat down to watch The Bible Mini Series last night on the History Channel. We were all excited, it had been hyped constantly on twitter by every Christian I know and it was Mark Burnett, creator of Survivor, so it had to be good. It wasn't like it was being made by a little church group somewhere trying to make a movie on a small budget like Fire Proof or Facing the Giants, this was being made by one of TV's greats..at least at "reality" TV. And he's a Christian so he would take extra care with the subject matter. So even though I was very tired of hearing about the premiere I was excited to tune in to his version of the bible. I had high expectations.

But I was very disappointed.

Here are a few questions and observations I have after watching it;

It seems that Mark Burnett and The History Channel knew that Christians have such a low standard for art in any form that we would jump to watch and support even the worst production. Like they knew it because we raved about movies like Fire Proof so they knew we had really low standards. That's why they didn't bother to have good wigs, or ethnically accurate actors, believable dialog, a well paced script or anything other then soap opera drama aimed only at manipulating the audience.

Why would someone like Mark Burnett not invest as much creativity, time, effort and money into a bible series as he would into Survivor? He has no excuse, the people who made Fireproof had a super low budget, he didn't he's Mark Burnett.

Why are Christian's offended by people who point out these things rather then offended at this being presented to us as art? Presented to us as an artist expression of the book we claim to love and live by? I honestly don't get it.

Sure, we all watch cheesy shows, some we love because they are cheesy, like  how people watch General Hospital or The Bachelor, we get that we are being mocked and manipulated by a soap opera or a reality dating show but when a show is presented as a way to tackle "Bible illiteracy" I would think they would at least hire actors that are of middle eastern decent.

Here are a few of the tweets I sent, from last to first...

I'm sorry but why does every "Christian" show have to be so cheesy w/ bad acting & why r were supposed to rave about it like its not?

They always leave this part out.. #thebible #historychannel http://instagr.am/p/Wa1J2qj1Zi/

Bad wigs are so distracting from a good story. #thebible #historychannel

Then I got this on Facebook from a girl I went to high school with, in response to my "Issac is very white"  status update; "Your negativity is exhausting" because how dare I criticize such great Biblical art! Well maybe because it isn't great, it isn't even good bad TV, I think it's an insulting treatment of the greatest story ever told, especially considering that it was made by people who have Hollywood and all that creative resource at their disposal.

I'll stick to watching what I consider real works of art about the bible and true classics,  The Ten Commandments and Passion of the Christ when I want to see biblical stories dramatized properly.

Anonymous said…
I totally agree with you! I had originally set my DVD to record the series .... But watched the first episode with my Jewish husband and was appalled at the quality and lack of good story telling , not to mention it was devoid of any sense of " God's spirit"
3/29/2013