The Hobbit Movie Was Mind Blowing 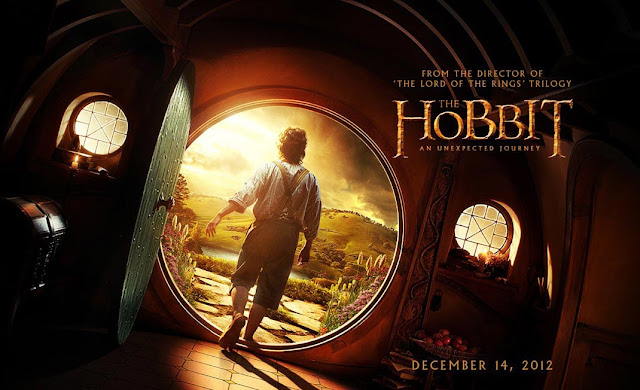 Evangeline, Her friend Benj, Owen Clyde and I all went to the midnight showing of The Hobbit last night.  This movie was unlike anything I have ever seen before. I know that one day I will have a conversation with my grand kids that includes, "oh yes, I saw the very first 48 frames per minute movie, The Hobbit." because this technology is unlike anything you or I have ever seen before.

The 48 FPM visually feels like your watching a play, it's so real that you really do feel like your watching real life, not a movie and that is what is wrong with it honestly. For instance, the scene of Hobbiton, It's a real landscape, not CG but it looks fake because it looks so real, if that makes any sense. We are so programed by the way movies look now that real looks fake.

But the plus side of this new technology is that even when your watching CG, you don't know it. You don't know it even when you do know it, like with Golum, he looks as real as Bilbo, or the wolves, they are so scary because they look so real. It is seamless as far as CG and real players are concerned.

It's so visually groundbreaking that it throws you off for the first hour of the movie. Like, you just cant help but watch the movie, when you should be getting caught up in the story, you cant, know what I mean? I should've watched in a normal, non XD theater maybe.

But I didn't want to. I wanted to be a part of movie magic history by watching this first 48 fpm movie in the format for which it was intended; 3D XD. And I don't regret it.

I have always hated 3D, it makes me dizzy, gives me a head ache, I never forget that I'm watching 3D while I'm watching a 3D movie and I just always felt like 3D movies were a waste of money, but not this time. This new technology is so far surpassed what existed before that I was blown away by it. Even before the previews were over I had forgotten I was watching a 3D movie. Evangeline and I kept saying "oh yea, that's some good 3D".

Unfortunately, the awe and wonder of  never before seen visual technology over shadowed the story. It actually takes away from the story in my opinion.

BUT, (yes, another But) the story is AMAZING!!! That's why I have to go see it in a none XD format very soon because what Peter Jackson did with not even half of a tiny book, is truly spectacular. He took a lot of liberty with the original story line by integrating actual facts and background that are part of the greater story of the Hobbit and Lord of the Rings. He had a wealth of history from the appendices and he used it perfectly. He also made small scenes in the book longer and of course, made up some stuff for action and pacing purposes, but all these changes to the story worked.

I think it's safe to say that I loved the Hobbit, it lived up to my expectations but I also felt confused and unable to properly process it visually because like I said, it's unlike anything I have ever seen before.

BUT (and yet again, another But) let me hit some of my takeaways and favorite things from the viewing;

So, yea after only three hours of sleep, I guess I will just say to you, be ready to not know what the heck to think of this movie if you see it in 3D, be ready to love it, hate it, feel overwhelmed visually and amazed that you are watching history in film making. No matter what, you will be taken on a most fantastic adventure, one you will never forget.

Lord of the Rings movies The Hobbit