The American Church and State: A Rant 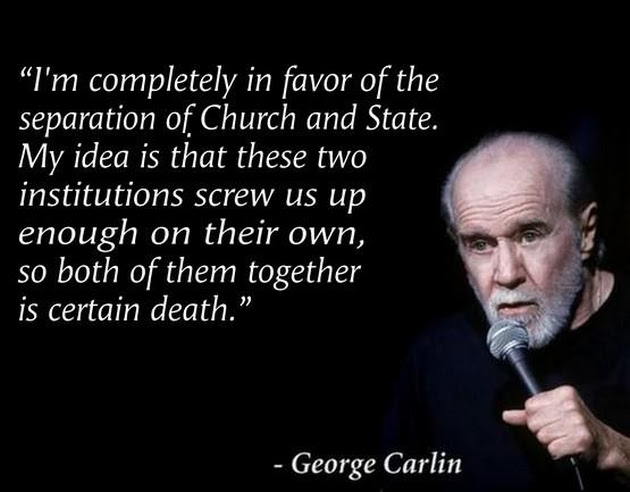 Election season always exposes the ugliness of the American church. No you say? Well have you ever seen it bring out the best in it? If so, please tell me when that happened.

Of course, I'm looking from my place in the world, Louisiana, one of the most Republi-Christian states in America, so my view is not so clear maybe. Hard line political pundits/preachers are invited into pulpits to spin webs of half truths that entice and capture hungry hearts and minds. They know hurting people, lost in sin, seeking redemption, ignorant of the separation between politics and eternity, will take the bait and so they throw it out there, bait that uses God, salvation, morality, mixed with patriotism, social and cultural responsibility laid on a bed of delicious fear.  They trick us into joining their army, into fighting a war for Republi-Christian domination under the guise of Christian Values.

But have you ever noticed that it never dominates? What they are doing has never worked so by all means, keep doing the same thing. Love certainly has never dominated in American politics. Other then the love of money of course.

And we dare to marvel at the increase in Atheism in our country? The mass exodus of young people from our congregations? We get into bed with Cesar and then blame the lost that Jesus sent us to proclaim the good news to for our declining church population? We dare to blame gay people and abortion doctors for a "curse" on our country? Hollywood, the liberal media, gays, everyone is to blame except for our actions?

Our sponge like digestion of Rush Limbaugh, Anne Coulter, Shaun Hannity, Glenn Beck, screams so loud what we really value, which is feeling superior, being right. Acting like Pharisees rather then Jesus. And before you knee jerk and start telling me how Democrats are this and democrats are that, let me just say, yea, your right. I'm not toting their philosophy any more then I am the Republican philosophy. But I've never been a liberal Democrat, I was a cool aid drinking Republi-Christian for over 20 years, now I am an independent.  I'm looking from a place of living smack dab in the middle of Republi-Christianity. My church environment, friends, everything around me is so far right it makes me want to move to Portland Oregon! I get put into this neat little box of being a commie-liberal that just wants rich people to be punished and poor people to get government handouts rather then jobs simply because I like Obama over Romney.

Which, by the way, is our only two real options because people like Ron Paul, who dare to speak honestly and with real conviction are "too risky". Even though I disagree with a lot of his platform, there is something wonderful to be said for honesty and integrity and not allowing yourself to be bought. But thanks to the dominant two parties, and Republi-Christians who tow the party line like they would sink if they didn't, people like Ron Paul don't stand a chance.

"Oh, we're so politically smart! We know what's right for America. We will stand up for righteousness. We will take back our country" they say but then their political actions are completely dictated by money and greed controlled political parties in which selfish ambition is disguised as elements of change, until that is, our elected idols get high on that control, power and money, then, they work to pass a few token laws, throw them at the dogs like a bone to keep them distracted so they can raid our coffers and destroy the real moral fiber of our country.

Your pro-life, anti-gay, small government platform is sitting on a fabric torn to pieces by lust, greed, hatred, anger, pride, love of money and selfish ambition, and you think it's strong enough to stand against unrighteousness? Really? You were never meant to set up house atop that pile of debris, that sand. Cesar.

The American church is a sleeping giant that grows tired too quickly when acting in love because acting in love requires a super natural grace that only comes from depending on Him. We showed our true colors after Katrina when the government failed, the church cried out to God, he heard us, strengthened us and showed the world himself through us but we only had that short burst of energy it seemed, because we were giving handouts, which was needed at the time because people had lost everything. But what has always been needed is for the church to take care of the orphans, feed the hungry (which is more then just a hand out) but instead we have retreated back into the arms of politics, hoping we can change the world by doing what we have always done. in the words of Dr. Phil, "How's that working out for you?"

I am tired of, every four years, church leaders aligning with certain political figures. They may not come out and say from the Pulpit "I'm a Republican, vote Republican", but instead they will have a known political figure, who also happens to be a Christian, who also happens to have written a book bashing the president, maybe even questioning his Christianity, or the like, this guy is invited to preach to the congregation. And sometime they say things like, "This president does not seek God or honor God" or "We are going to take back our country for Christ this November".

I think a church should have this litmus test for anyone they allow to speak to their congregation, First, they should ask; would their message be relevant to everyone at all of our church campuses? Would the congregation "get" the message if it were more or less of another race and social economical group? Is the person known to be tightly associated with a political party? I believe the answers to those questions should be yes, yes and no, before allowing someone to come speak to your congregation. And further more, if a church feels safe having a very one sided political figure speak at a service, they need to ask themselves why. Churches should be a place for Democrats, Republicans, and everything in between. If your a church that wants to be know as welcoming everyone from all walks of life, so you can show them Christ and maybe make disciples of them, then you certainly wouldn't want to have someone in your pulpit that will tick some of the people off because of their politics. That's why separation of church and state is such a good idea, so that a churches state view doesn't cause them to repel people from Jesus.

A person who preaches Jesus, the message of the bible, Godly living, teaches scripture, etc, like pastors are called to do according to the bible, is what the church needs in the pulpits, not political hacks trying to get people to vote a certain way. It's evil and THAT is one of the main reasons Atheism is on the rise and young people are leaving the church in droves, we are far to political. We are no longer a safe place where grace and mercy are found instead we have fear mongering political pundits mixing rhetoric with religion. Makes me want to barf.

Gettin my preach on Politics

Anonymous said…
Awesome!! Great article my dear. You should read the one I am posting soon. It's going to shock people.
8/17/2012