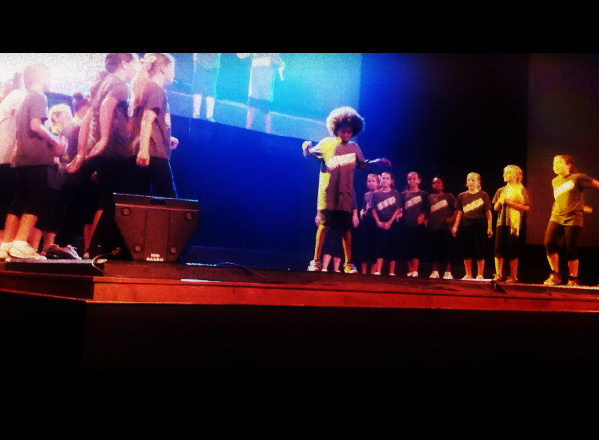 He's always had it in him, this was obvious when we made this video, a month after he became our son back in 2009.

He was so little and hardly knew any English.
He was scared in this strange new home,
This bizarre new country.
It certainly wasn't Africa.
He was now an American.
Dean recorded the video and I remember watching it for the first time and knowing that he was lost in the dance.
It was his refuge.
It comforted him. reminded him of home,
In his new home.

He's been dancing ever since.
First under Dena Rizzo at the Dream Center when she taught Hip Hop to the after school kids for two years.
And this year he was able to be a part of the first HPC Dance, also taught by Dena.
She has been the person that cultivated his gift.
She sees in him the heart of a dancer.
And she's correct.
He dances all the time.
From his 'Fro to his style of dress, it all says "This is me, I am Abel. I am a dancer"
He has his own style, and I LOVE THAT!
It's fun watching him become who he is becoming.

Last night was the end of the season performance by all of the kids who participated in the HPC dance program.
Abel had a solo.
I was crying watching him.
He's 10 years old and he found something he loves to do and is good at.
I'm a proud momma.
I know this is just the beginning of him finding himself.
That makes me happy.

Evangeline recorded this with her phone, it's not a great quality but it's still great.