My Review of The New EP by The Assemblie 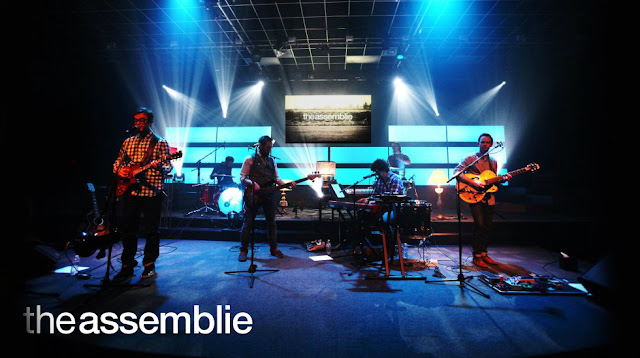 I don't like 95% of all Christian pop music. It's mostly crap. Worship music is even worse. It's crap because it's regurgitated, copy cat, completely uninspired junk.

I mostly fault the Christian music industry wanting to play it safe all the time, but I also fault artist who live in church bubbles and write only from that bubble,  I liken their music to inbred animals. Very unhealthy.

But this Christian band is the exception, they are the 5%, they are healthy, they are not crap.

I should make a full disclosure right now though, I know these guys. They go to the same church as I do. I've been a band mate with the drummer, Jeremy Beyt, since 2009, he is our drummer at the Baton Rouge Dream Center.

Kris, the lead singer, has played with us at the Dream Center several times over the years but he mostly plays and leads worship at the main HPC campus.

So, yes, I am biased. But actually knowing them, knowing they were raised in church and that they spend most of their time at church or with other church musicians, made me even more critical of them.  I expected these guys to regurgitate what they are submersed in.

I expected music that we in their church family would like because we know how great these guys are but what I got was music I want to listen to while working, while writing, while driving. What I found was that these guys made world class, highly professional, original sounding, quality music that isn't just from a church bubble but it transcends that confined space.

The Assemblie's music is a refreshing mix of current-Mumford and Sons-style sound, a little Cold Play, some Hillsong and a tad of Phil Wickim. But they don't sound completely like any of these groups and that is what I love about their music. They have their own sound.

Kris has a very easy to listen to voice, it's soothing, calm, and never annoying. The lyrics are simple, the love and grace of Jesus.

But I have to say that I was most impressed with the music. These guys didn't play it safe there. You can tell they weren't just trying to put out even more Hillsong or Jesus Culture sounding music. They weren't trying to just please a certain group of people but it sounds as if they worked to be original, to create their own art and I absolutely love that.

In an age of cookie cutter everything, I found The Assemblie to be refreshing. Listening to this EP gave me hope for Christian music.