We call her (the van) "Road Jewelry," but you have to say it like, "Road Jewry."

I gave her that name the day that Dean drove her into our driveway.
I wanted to name her "The One Van," like "The One Ring" from Lord of the Rings, but my family vetoed that idea.
So, because she's gold, like a pimps tooth or Mr. T's necklaces, we named her "Road Jewry."

My days on 21 Jump Street were spent sitting in miss Jewry.
Two 15 hour days!
I have one picture that kinda sums up how miserable those days were... 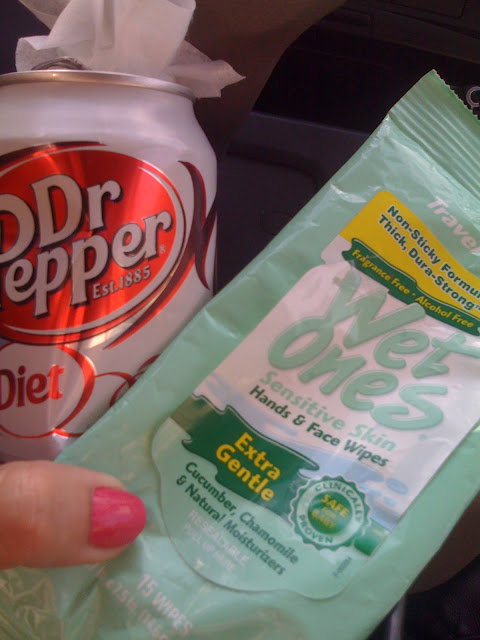 I sent this picture to Nathan and Esther (who were in their car behind me, working on the movie also) right before I could no longer take the need to pee. I had been holding it forever!
The PA kept telling us there wasn't enough time to walk to the bathroom, a bus with one toilet for 75 extras, and it was parked about a quarter-mile away.
So, I finally made my own bathroom.
Thank God for tinted windows.

Peeing in a Dr. Pepper can seem to be the worse part of a story, right? Ha, no, those two days were just full of misery, I mean memories :-)

Any time I'm on a set and extras start complaining, I just say, "let me tell you about my two days on the set of 21 Jump Street..." and by the time I'm done, they are no longer complaining.

But I won't go into all that here. I'll just say that I am very thankful that Road Jew-ry was comfortable at least, her iPod doc worked, she was cool, and that she actually made it into the trailer, maybe the movie, we'll see tonight.

I do have to say that Jonah Hill and Channing Tatum were very friendly. In one scene, they are driving in a Corvette, they come to a screeching halt right behind my van, and they have to jump out and start running. So every time the scene would reset to shoot again, they would walk past my van. They talked to me and were joking with Nathan and Esther. 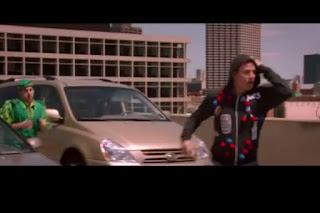 That alone was the one bright spot in those two days, oh, and the fact that Nathan and Esther had brought pizza. I would have starved without them!!

Here's a screenshot from the trailer.

There's Road Jewry. You can't see me in the van, which is weird because I was undoubtedly in there 90% of the time.