Who I'm Supporting for President and Why

January 27, 2012
During the last election, I attempted diplomacy and discretion when expressing my opinion, yes, I really did, I promise. Sure it was MY version of discretion, and to many people that are reading this now, me saying I used discretion at all is laughable because I was pretty opinionated. But anyway, I know how much I actually didn't say and why.

See, I have attended a very conservative church since 1996. They invite the leaders of The Family Forum and our Republican governor to speak there and some high profile republicans attend our main church campus, so, even though I spoke out in support of fair and godly treatment of Obama during the campaign in 2008, I tried to avoid an outright endorsement of anyone. I ended up voting for John McCain but I actually prayed as I entered the voting booth, because I was so torn on who to vote for.

I am not a single issue voter. I was a hard line Republican for 20 years, but I have been an Independent since 2004. When I'm trying to figure out who I want to vote for I research their voting record if they have one, I read stuff written by them and about them but then I rely a lot on how I feel when I hear them speak. Do they give me the creeps? Do they seem phony? Do I believe what they are saying? What do I see in their eyes? What does the history of their life say about their character and beliefs? Do they seem humble? Do they seem teachable? And, how much of what they say that they would like to accomplish, do I also want to be accomplished in America? I add all of that up and then I make my decision. That's why I had such a hard time during the last election, when I added up all that, the candidates were almost equal.

But this year, well, it's a different race. I liked Huntsman but he's no longer running. Romney is too jingoistic, seems desperate to win and will say and do anything to win and has the money needed to brainwash us into a trance like stupor of name recognition as we walk into the voting booth. Newt Gingrich is the most unappealing Republican candidate ever, Santorum is way to Republi-christian for me to stomach and Ron Paul has just one to many crazy-extreme ideas for me to endorse him, although I did look long and hard at him as an option.

He doesn't give me the creeps. When he speaks, I feel honesty and sincerity. His life shows a man who has always been committed to his family, his community and his country. He always seems humble and teachable, even admitting he second guesses himself all the time. As far as policies are concerned,  I think he's working hard to get the economy back on track and I am more in line with him on taxes, immigration, health care, foreign policy, and education. I want him to succeed in a lot of the things he's working on now and I believe he needs four more years to do that (and it may not ever happen due to us having the most extremely divided congress in our history, with hard line Republicans as the majority) I like more about him and his policies then I don't like and much more then I like any of the guys running against him.

So, this election, I will stick an Obama sign in my yard, because that is who I will be voting for in November...unless Dean decides to back the Republican nominee, he's much more conservative then I am politically..how funny would it be if we had a Obama sign and a Romney sign in the front yard?

Only in America! I love it. 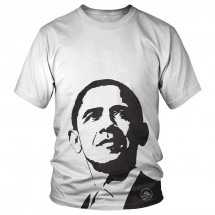 cve said…
I think you should totally buy that shirt with the President's face on it and rock it during worship with some of those awesome heels you have.
1/27/2012