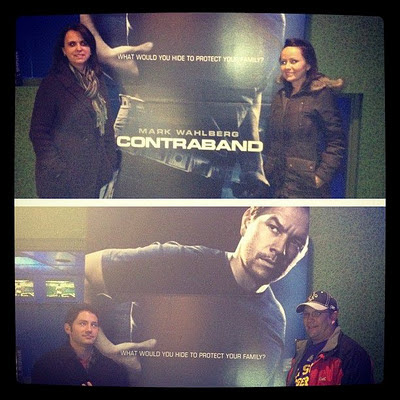 Dean and I met up with Nathan and Esther last night at midnight to watch Contraband.

First, I'll break down the "who we saw and didn't see in the movie".

Nathan is seen pretty quick, in the bar room, wedding scene. He's walking across the dance floor. I screamed out when I saw him much to the embarrassment of Dean :-) Look for him on the left side of the screen.

Then we saw Esther a couple times real quick on the dance floor. Her hair was more red and shorter so she looks different.

Then you see her and Nathan dancing in the back ground.

Next, in a scene a little later, where Abel is riding his bike, you see him from the back. It's real quick too. He's out in front of an apartment complex where Mark's character is going to visit the Giovani Rabisi character.

Dean wasn't seen, except for he knew it was his blurry torso walking past a guy when he answers the phone in the TSA office.

And finally you see me.

It was the same scene that is in the trailer. I'm behind the lady that is asking him questions at the TSA office.

You see the computer shot of his ID picture that I took of him, so you actually see the scene I was in with him, but you don't see me.

Then a little later, you see hands typing on a computer keyboard, we are pretty sure those are my hands but not positive.

Watching it was both exciting and disappointing, but not unexpected. We all know, as background actors, that we are usually blurry, if seen at all. A lot of times we are cut from the movies. They call us "background artist" for a reason, we are in the background, we fill it and make the scene environment seem more real, and 99% of the time we are completely unnoticed by people viewing the movie. We get it. So if we catch even a quick glimpse of ourselves, it's a pretty cool thing.

Now to give a quick review of the movie itself.

I honestly liked it more then I imagined I would. It was entertaining. It had some good plot twist and it was clean. Yes, it had a lot of F words, and it was violent but it wasn't extremely graphic like a lot of movies are these days.

I think guys who like action movies, will enjoy it even more then I did. And Ben Foster is amazing in it, so is Giovani Rabisi, it goes without saying that Mark was great, this type of movie is totally his element.

So yea, it was more then worth going at Midnight to see it and it was even more special that we got to view it with Nathan and Esther who were the ones that introduced Dean and I to the movie biz!

Yea for living in Swamp Hollywood!