I've been sick for a few days so I've watched more TV then I thought was humanly possible.

I watch in online so I can pick and choose what I want to watch and when. Love that.

I watched three episodes of Arrested Development.  I had never watched it before. It's a great show that was really ahead of it's time. (it only ran from 2003-2006) I hear there is a movie coming soon. That should be good.

I also caught up on last weeks Parks and Recs, Community and The Office. And I get madder every week that 30 Rock is not back on! That stupid show Whitney is annoying at best.

But anyways, Community was great, finally. To me it's been struggling this season so far, but it's improving.

The Office is actually funnier now without Steve Carrel. He was great, don't get me wrong, I thought it was going to be awful without him, but I'm pleasantly surprised at how much I am enjoying the new Office. James Spader is just amazing, he makes the show.

And then there's my Parks and Recs. That show is just so great. The writing is genius, the humor is original and very funny, and all of the characters bring pieces of perfection to the show. I laugh so hard watching it.

There is LOTS of fake news on FOX for sure..but they call it all real news.


I also get my news from TIME magazine and Christianity Today online, (the "Politics" blog on CT is especially good) both I consider credible news sources. 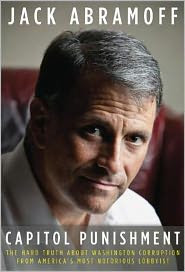 And finally, I watched the 60 minutes interview last night with Jack Abramoff. He's written a book titled "Capitol Punishment" its all about how easy it is to buy Washington...still to this day.

He was busted for it and now he's telling us, the people who elected senators and representatives to go to Washington to be our vote, our voice, that instead of doing the job we sent them there for, many of them are being bought by powerful lobbyist.

Duh! That's why people are so ticked off right now!

And people wonder why the "Occupy" movement has resonated with so many? Really?

I put the book in my amazon cart, cant wait to read it. I'm sure it will get me even more fired up.

Ok, gotta go back to bed. Doctor said I have Bronchitis and a Sinus infection so looks like a lot more boob tube watching is in my immediate future.

Maybe I'll get to watch all 53 episodes of Arrested Development.

..if only I had that Abramoff book already! I could be reading it instead!
Books Politics TV