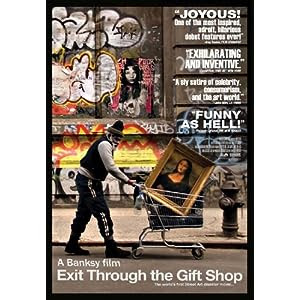 Evangeline and I watched the movie, Exit Through the Gift Shop, last week. If you have Netflix you can watch instantly right now. It's about street artist. Fascinating subject, amazingly creative "Documentary". I'm glad I didn't know much about it before I watched it.

Her and I also went to see the movie The Help the other night. I started crying at about 30 seconds in. Yea, no joke.  I loved the movie! My favorite character was Celia Foote. The actress that played her, Jessica Chastain, did a great job. And that little girl, lord help us, every time she was on screen I was crying! It's still so hard to fully grasp that people were treated so badly by other people in the not so distant past. I'm glad that Evangeline "gets it" more then I did at her age. Movies like The Help show us that we have come far, yet we still have far to go. Come awards season, I will be shocked if The Help doesn't get nominated for a ton of awards. It should.

I just received the first season of Entourage on DVD. I knew I had to watch it after seeing an interview with Mark Wahlberg where he said that all the characters and the subject matter were based completely on his life when he first came to Hollywood. Cant wait to start watching it. 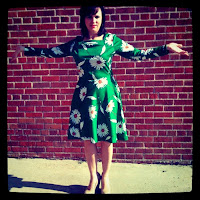 I think the three days I spent on the set of The Paper Boy left a lasting impression. The movie is set in 1969 so as a stand-in I got to wear a vintage shirt, which got me wanting some vintage clothes of my own. So last week E and I went to Time Warp boutique here in BR on Government Street and I bought this dress. It's from the 60's. I look good in 1960's attire. I need more.

Last night I went to Thibadoux LA to be an extra on the feature film, Parker, staring Jason Statham and Jenifer Lopez. Also doing background work on the movie last night were 69 members of the Thibadoux High School band. We were all to be part of a parade scene.  By the time I arrived at 3:00pm, they had already been waiting for two hours and by 5:00pm they were getting really bored and antsy as any teenagers would. (But they were still very well behaved. Great kids) So their director decided to have them practice some songs for us. They did 6-8 songs and when they were done I knew exactly why this movie had chosen them to be the marching band in the parade. They are amazingly talented.

I really don't know why music brings me to tears but it does. Especially music done by kids.

Check out some of the pictures I took of them while they were performing for us and dancing for us.


SO fun!! By far the most fun I've ever had while waiting in an Extra Holding area.

I tweeted this last night while I was there waiting to go to set, "There's always a weird annoying talker in Extra holding. Extras as a rule are weird..wait I'm an extra." Yea, I get it.

Tomorrow Dean and I are off to Dallas for the weekend with our friends Nathan and Esther. The guys are going for the first LSU game of the season. Esther and I are going for the motel, sitting by the pool, site seeing, shopping, and more. I'm so ready for a relaxing weekend away.

Dean said we HAVE to go to Billy Bobs Friday night so I'm bringing my cowboy boots and short blue jean skirt (it's right about the knee, I don't do "short" ;-). We are thinking we will try to catch some live music somewhere, Hopefully I wont tear up.