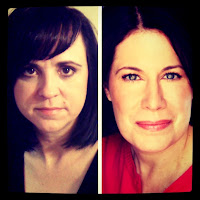 When a friend asked me what a stand in does, I joked that I was a butt double for an actress. (Ha! If you have seen my butt, you know why this IS a funny joke :-)

No seriously, this is how Wikipedia describes a stand in..
A stand-in for film and television is a person who substitutes for the actor before filming, for technical purposes such as lighting. Stand-ins are helpful in the initial processes of production. Lighting setup can be a slow and tedious process; during this time the actor will often be somewhere else. Stand-ins allow the director of photography to light the set, the camera department to light and focus scenes. The director will often ask stand-ins to deliver the scene dialogue ("lines") and walk through ("blocking") the scenes to be filmed. In this way, a good stand-in can help speed up the day's production and is a necessary and valuable cast member on a film.
Stand-ins are distinguished from body doubles, who replace actors on camera from behind, in makeup, or during dangerous stunts. Stand-ins do not appear on camera. However, on some productions the jobs of stand-in and double may be done by the same person. In rare cases, a stand-in will appear on screen, sometimes as an in-joke. For instance, the actress who pretends to be Ann Darrow in the stage show during the final act of King Kong (2005) is played by Naomi Watts' stand-in, Julia Walshaw.
Stand-ins do not necessarily look like the actor, but they must have the same skin tone, hair colour, height and build as the actor so that the lighting in a scene will be set up correctly. For example, if the lighting is set up with a stand-in shorter than an actor, the actor might end up having his or her head in relative darkness.
Stand-ins are also used for animated characters in a Live Action film, sometimes with life-size character models, so that the animators know where to place their animation and how to make them move realistically, and for actors to know where to look. In these cases, skin-tone and hair colour are not so important. Height and build, however, are still important for any interactions between Live Action and Animated characters.
Some celebrities mandate that they will always have the same stand-in. Famous cases include Pluma Noisom (stand-in for Claudette Colbert) and Adam Bryant (Robin Williams).

I have to say, I love this movie making stuff. Being a stand in is a new thing for me. It's next level for sure. You eat with the crew. Get paid more. Get called by name. I could get used to this. But I shan't 'cuz it don't last. I will get to do a few more days as a stand-in for this actress, and I may get to do it for another actress in the future but by September I will be back to being just a background extra like I was before. Which is cool, I dig it. I just like all the perks of being a stand-in better.

I completed the first phase of this Swamp-Hollywood gig as a stand-in on Wednesday and the next day I was back to my normal jobs of scrubbing toilets at the Dream Center and scooping kitty litter for a cat lady.

My reality is varied and extreme..
I lead such a glamorous life!