When he fist came home he wouldn't sleep really.
He would lie awake at night and be the first one up in the morning.
If we went on a long trip to Florida, driving through the night, he would stay awake starring out the window at the darkness.
He would be the last one to fall asleep in the car.
I'd have to tell him to close his eyes. 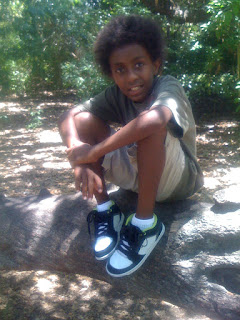 Maybe he was excited?
How strange it all must have been.
Think about it.

But now, he sleeps.

The other night he fell asleep on the couch while watching a movie.
Now he sleeps until 8am or 9am sometime.
Now, when I go into his room after he's been in bed for an hour, he's asleep, not lying there with his eyes wide open.

I started noticing the sleeping better progress over the last year.
Now, on the long drive to Florida, he sleeps.
Now, even on vacation he sleeps.