MY REVIEW OF Half The Church by Carolyn Custis James 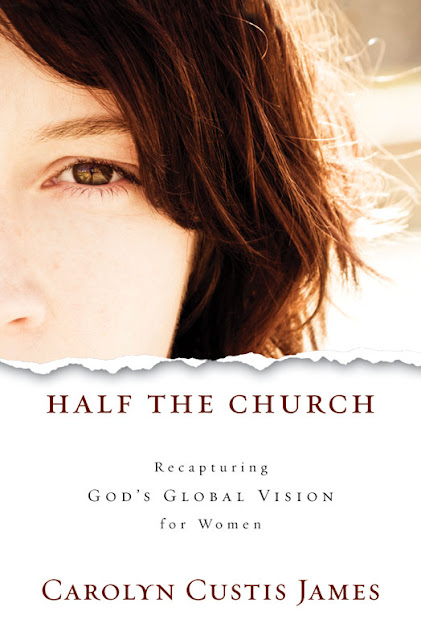 I tweeted the other day that I felt this book should be taught in every bible college, mainly because I think if it were, then maybe, just maybe, men and women both would give more thought to long held views of their perceived assigned rolls in the body of Christ. I felt encouraged by the possibilities after I started reading this book. But then, I was snapped back to the current reality while watching a video that promoted a new Christian woman's group. The video stated that we are mothers, daughters, helpers. Women are married to pastors, but are not pastors ourselves. We have our place. We are loved by men, we are respected by them, but there are areas we are not allowed. This was the clear message. And sadly, this is the predominant message still in the church today.

But is this really an accurate translation of what God intended for half the church? Is what we have always been taught, what is the dominant view of women in the body of Christ really accurate and scriptural?  That is what Carolyn James looks into in this book.

What I liked the most about this book is that she does not "westernize" scripture. She does a great job of making us look at the entire world in light of the scripture. This is not a book about whether or not a woman gets to speak at a local mega church. This book looks at a world that is more then half populated with women, many who are living in sub human conditions, and how what we teach as true applies to them.

"Like quarreling siblings, we are arguing over how to divide a pie so everyone gets their fair share while the neighbor's house is on fire. While the West engages in debate, millions of little girls are being sold as sex slaves in vast regions of the Majority World-often by their fathers-and human trafficking is happening locally, right under our noses. Evan as we debate we must remember the global context"

While reading this book, I was steady highlighting and underlining. I didn't agree with everything she said of course but I did gather a treasure chest full of golden nuggets that I feel were straight from God, for me. For instance, the idea that as Gods image bearers each sex is supposed to reflect different aspects of his image. I was always taught that women are the soft nurturing side and men are the firm strong side pretty much. But no where in scripture does it say that.

Another interesting revelation came when she explores the creation of Eve. We always hear people say that she was made of Adam's rib but the actual words meant his "side" not his rib. And Eve is also called in scripture "Flesh of my flesh and bone of my bone" not just "bone" as she would be if it were only the rib that she was made from.

"Men and women working together actually predates men working with men and women with women. It would be one thing if God confined this male/female team to home and family and then mapped out the remaining territory into separate spheres for men and for women. But he didn't do that. Their mission-together-is to rule and subdue the whole earth on his behalf...God said 'It is not good for man to be alone' this statement means our brothers cannot be the men God is calling them to be..without their sisters. Together, we are God's preferred method of getting things done in the world. He created his image bearers male and female, blessed them and spread before them the global mandate to build his kingdom"

The most disturbing chapter for me was chapter six, titled "Here Comes the Bride". In this chapter there is a section she labeled "Bridal Search", that's where I started getting that awful sick to the stomach-shaky-painful to remember-feeling.

In 1985 I worked at Jimmy Swaggart Ministries. I started working there when I was 18 years old and I was a brand new Christian. For the next three years I spent most of my free time with kids from the bible college where the women were taught that their first command, their first priority as a Christian, was to submit. I remember the many times I would start to say something and a male student would say "submit woman!" It was a joke and a firm belief as well. I worked hard to conform, as all the single women did, especially since we now knew that our only hope in life was to mary a Godly man who could lead us. We learned well that any strength or gifts we had were to be submitted to a man. Period. The end.

I had so many friends who married during that time and most of them are divorced now. They are broken reeds. They lost themselves in men who were eaten up with power and the thoughts of what great leaders they were and it destroyed both man and wife. These women believed their husbands were the reflection of Christ and now they find that reflection abhorrent. They filtered all things spiritual through that lens and it left them with a distorted, wrong view of God.

I distinctly remember a conversation with a friend a decade later, a guy that I dearly love, but who said to me "why would you want to go to college now that your married? I mean, really, your only job now is to stand behind your husband and follow him". He was honestly saying what so many Christian men I know really did believe at the time in that environment and still believe today.

"Statistics from many studies indicate that on any given Sunday, approximately one out of four women in the pews are being or have been victims of verbal or physical abuse"

That is one reason I believe this book should be taught in Christian colleges. There needs to be a different perspective taught to both men and women in church world. Sure, there are debatable applications and interpretations but the bottom line truth is we have taught our sons and daughter incorrect applications of submission, gentleness, giftings, etc. The roles of men and women in the church needs to be explored and talked about.

This generation of Christians are global, they see the injustice of teaching women that "yes" should be our default. I believe they want to look into scripture and see what God desires for both men and women, because what is currently being taught to them is falling short.

I still believe that improving the view of women in the global church is an uphill climb, one created by the enemy to keep us from really reflecting the true and complete image of Christ. But I believe it's possible. Thanks to books like this, we are at least on the right track, starting to discuss, explore and make steps in the right direction.

Half The Church by Carolyn Custis Jame
Books The Church