February 16, 2011
I went for a job interview yesterday with the Academic Distinction Fund. I have not been on a real job interview since 2000 when I interviewed to work at the GAP. It was weird, I hope I did it right. I feel like the interview went very well. The job really does seem like a perfect fit for me so please pray I get the job.

We bought a Telia painting the other night at the Love Extravagantly silent art auction. It was a benefit to help Kevin and Jennifer Jarreau raise money to go to Swaziland Africa to be missionaries with Children's Cup. (we actually haven't paid for the painting yet since we are broke, but will when we get our tax return :-) Telia is a real artist. I love her stuff. Look how gorgeous this is.. 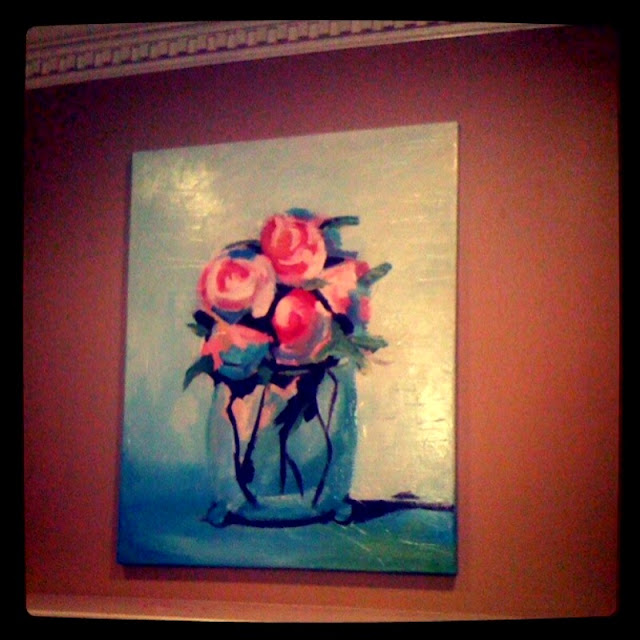 I watched some of the Grammy's the other night, I loved Cee-Lo's performance. At least he can sing good live.  Justin Biemer haters, your jealousy is blinding you to the next Michael Jackson. He is that good.  I had never heard of Arcade Fire before watching the Grammy's. I went and listened to their music after ward. I don't think they're terrible but I don't see how they won Album of the year. I get the feeling that if I were a young Hipster I would have to like them. I'm glad Miranda Lambert won for Best Female Country Vocal Performance, she's a great singer and she's curvy.

I'm glad red lip stick is making a come back. As you can see from the image below, I worked the red lips in the 80's, and actually, I wore red lips until 2001 or so. Giving up that look was not easy. It was very hard for me to get used to pale lips, but I did and I actually like them now but I'm also glad red is returning. It's classic.