"..The Most Natural Thing in the World"

June 03, 2010
Last Monday night at worship team practice we were about to start rehearsing a song we do a lot called I Really Love You. It's by Norman Hutchinson and Arnie always leads it. It's jazzy smooth goodness and Arnie does an amazing job on it. He does it so good most people think of it as "His" song. It was definitely tailored for his voice. But Monday as we started to do it Arnie looked at me and said "Carole, you wanna lead this one?" I was like "what? yea! The first verse?" He said, "start it and we will see how it goes" So off I went, singing Arnie's signature song. I was very scared but also excited. Next verse came and I looked at him about to ask if that was it but he said "keep going" so I did. I sang lead on the entire song! Arnie still did all the cool Ad-lib parts, so I was glad his vocal presence was still there. After we were done he said "Ok, that will work for Sunday."

I have never lead a song before at a worship service. I am a singer, as most of you know, but in that setting I have always been back up and very happy with what I get to do. I sang a verse in a song at Easter this year but a whole song, well that's scary.

I emailed Jordan, our worship leader and told him (he's in Washington this week visiting family so Anj is leading the service Sunday) I told him I was so nervous that I wanted to puke! And he said the most encouraging words to me,

"Haha!! That's great. Don't be nervous. You know how to sing it's the most natural thing in the world. You'll be great" and he also said "Plus if you keep reminding yourself that it's not about you it takes a lot of the pressure off you. You'll be great. And even if you screw up God will cover your slack if your hearts in the right place."

All so true and all exactly what I needed to hear. Cuz' honestly, failure is what I am most afraid of. My first reaction is to say "no, I can't, are you sure?" all the words of doubt motivated by my fear of not being as good as Arnie. My fear of failure. But the truth is it's not about me, I can preach against fear an live it in so many areas, I can say "who cares what people think" and mean it, it's time to do that with this talent also.

It's all His anyway. It's not about me and I am blessed to sing at all....It's the most natural thing in the world :-) 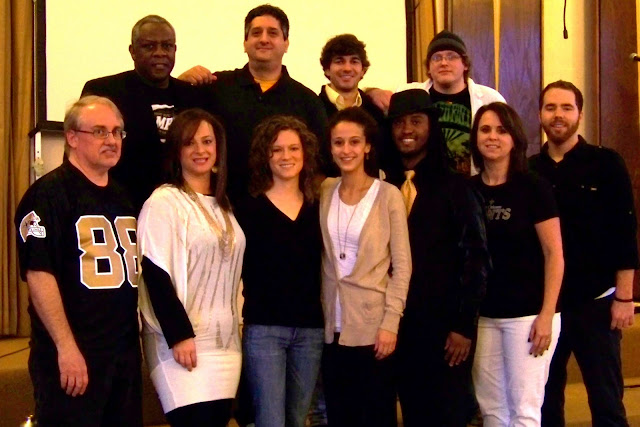