March 13, 2010
As I exited the Chinese restaurant with Dean, I caught a glimpse of something stunning and intriguing in the window of the next door shop.

"oww!! Baby look at those hats!" I said to Dean as he passed the window up. 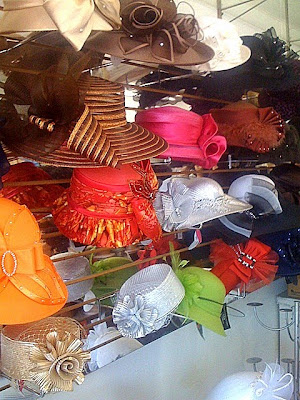 He was headed toward the Win Dixie that was down the way in the same shopping center. We had told Jillian, the Lady I work with, that we would bring her back a Coke, Dean was going to get one out of the vending machine that was outside the Win Dixie. He looked at me like I was crazy and continued on his mission.

I however was drawn into the store like a moth to the flames..

I had actually been to this shop before. Last July when E was having her Rock Icon birthday party, I was looking for a wig to help me look like Pat Benatar but the ones there were too expensive. This was still a wig store but with Easter coming the entire front was filled with the most magnificent hats. 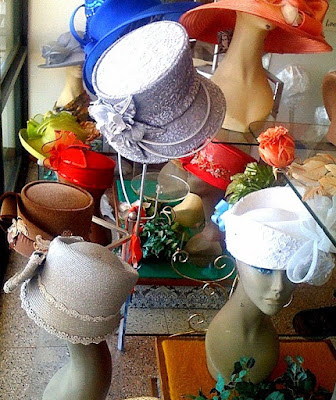 Look at that Silver one in the middle. And the darker silver one at the bottom. They are spectacular! 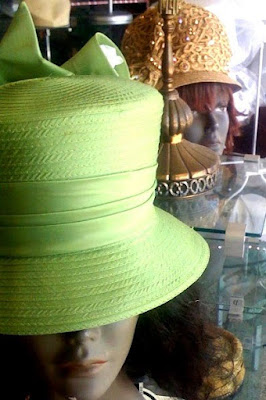 But If I could wear hats with out my head itching off my skull, I would wear one like this green one. Isn't it glorious? It's not blingy yet it's mammoth and says loudly "I ain't even close to being scared". I see it with a solid black, Audry Hepburn style little black dress, with black gloves that go up to my elbows and on my feet, a pair of very pointy toed Paten leather pumps. Yes, the green hat would be the only splash of color in my outfit and it would be perfection.

I slowly strolled through the store, gasping and exclaiming many times "I love this one..Oh, this one is so pretty.." and I looked at the price tags of these beauties, $85 was the cheapest one, most were $100 to $150. I knew I would never be able to own one of these treasures, they were way out of my price range for something I couldn't even wear comfortably..But I admired there Existence..

Like I was in an Art gallery...these colorful, creative, beaded, laced up, bowed up and even feathered up, array of hat's, spoke something to me and I still don't know what it was.

Maybe this was psychosis induced by too much Chinese food? Maybe like a Raccon is drawn to shiny things I'm drawn to colorful things? Maybe I just wished I had the money to buy one and the scalp to tolerate one and then the guts to wear one.

What ever it was/is, I now have the second hat picture as the back ground on my iphone ...Like art.
Art My issues