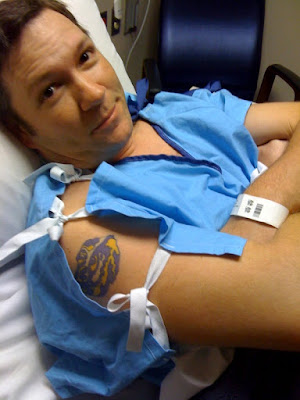 Yesterday Dean had a Hernia in his belly button repaired. He's had this hernia for a while. You couldn't even touch his stomach without him wincing. We set the surgery date a few weeks ago before the earth quake hit Haiti. Dean considered putting off getting the Hernia repaired because he didn't want to miss being able to go to Haiti but since A, we don't know when/if we will go and B, lifting heavy stuff could have made the hernia even worse, we decided to go ahead with the surgery and then we can go to Haiti after he is all better (which takes 4 to 6 weeks) if there is a team going then from HPC.

I have read lots of twitters and blog post from people who say to non medical/rescue workers "Go" and people who say "don't go". Both have legitimate cases for why or why not but I would like to just say a few words about that.

Right now a couple pastors from our church are in Haiti and have been since a couple days after the quake. They are assessing the need and when they get back, they will decide if/when trips will go and what they will look like.

We are not medical personnel so we would be going with a team that more then likely would be doing manual labor, holding babies, helping the sick and injured, etc. After Katrina Dean and I both went to help at the New Orleans airport which served as a triage and transport hub. We also helped here at different shelters and disaster relief stations. Dean went and helped with clean up and relief in St. Bernard parish, one of the hardest hit areas, after Katrina. Being a part of HPC we have had the privilege of helping after disasters and with extremely impoverished communities many times over the last few years. We have also both gone to Ethiopia, and Dean to Swaziland. SO we are not totally green to disaster relief or extreme poverty.

The people that are planning to go, that I know of, are going with teams. Teams that have been in contact with their partners on the ground in Haiti or they have a presence already in Haiti. The teams will have specific jobs to do. They will not be a burden on the local people, they will be self sufficient, and go as a group to serve the people of Haiti. Yes, right now it is best for medical and rescue teams to be there and for air space and such to be used by them specifically. But Haiti is now beginning to transition to a time of needing other types of support and help as well. Team organizers are right now finding out what pastors in Haiti need and if it's people coming there, that is what they will get, if it's not, then we wont go. We will do what they want. They are the ones suffering right now and we ONLY want to do what helps.

I know there are hundreds of short term missions trip taken to places like Haiti every year and some of these teams have a bad reputation for being more trouble then they are worth. I know for a fact that the team we would go with has gone out of there way to make sure that the people who go will be working their butts off, serving the community, helping, and not putting ANY burden on the Haitian people but serving, serving, serving. If a team is self sufficient and contributes valuable man hours and hard work to help hurting, tired, grieving people, and if the pastors and people there want us to come, then it is definitely a "Go" for us.

SO all that to say, we are looking forward to Dean being all healed from this surgery and being able to go with a team from HPC if they send one. As soon as we have any details you know I will be posting it here. Heck, Dean can't even have surgery without me posting about it with pictures...nothing is sacred :-) 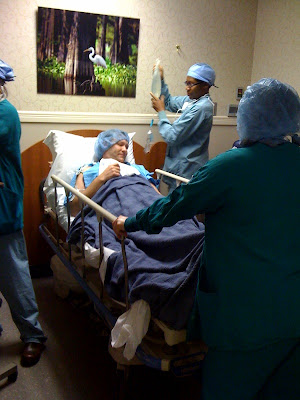 Dean workin the shower cap look, about to head into surgery. 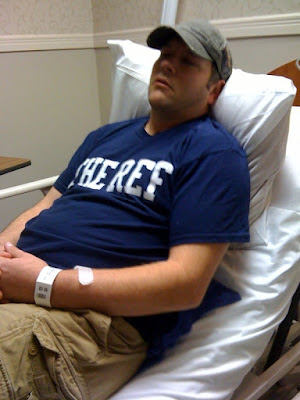