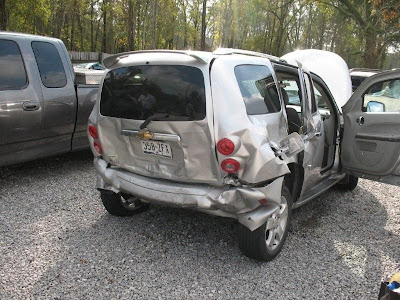 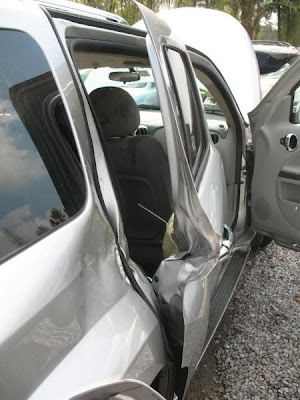 E was in the middle of the back seat. 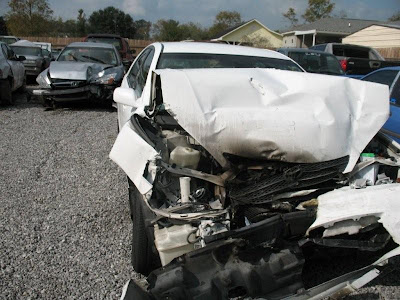 The girl who hit them's car

Last night we were watching the Soloist but my dad was board because he had already seen it so he ask Meg and Evangeline if they wanted to run to Sonic for some ice cream. They were gone all of maybe 10 minutes when I get a call from Evangeline telling me they have been in a wreck. Donna and I jump in the car, Dean was sleeping so I didn't wake him up. The wreck was not even a mile away, at the end of Perkins and Airline.

When Donna and I pulled out of our neighborhood we saw a car on fire. It wasn't my dads car, but his was not to far away, totally looking like a crushed can. They were using the jaws of life to open the doors of the car. Only my dads driver side would open. They were all ok just stuck in the vehicle. Evangeline was sitting in the back middle. All had been wearing their seat belts.

Once I saw that they were pretty much ok, I ran back to the house to wake Dean. I called Alicia Lee, my neighbor and she very kindly came and got my boys, who were sleeping. I hurried back to the seen and Dean came just as they were loading E into the ambulance. Her back was really hurting her and since she was in the back seat, a diabetic and hurting, they took her to get checked out. They x-rayed her and did urin and found that she is just really sore from the impact and nothing was broken.

The cop came to the hospital. He said they interviewed the driver of the other car, her passengers and friends from another vehicle that were with her. Turns out she's a 16 year old girl. Her and the other vehicle were racing. She was going 80 miles and hour, needed to pass a car so decided to go into the turning lane where dad was sitting at the light, waiting to turn. She hit them, dad said he remembers looking up and seeing a white car going way too fast four feet from his bumper. He thinks he let off the break and went to hit the gas, trying to get out of her way. They spun several times.

Her car caught fire. All the passengers were fine because they had on their seat belts. I really pray this teaches her not to ever race again. And I know it will teach my kids that. They know how blessed they are to be alive.

I wish you could see my dads car. The back seat is perfectly intact but both rear doors are crunched shut. E said she remembers getting hit so hard and the spinning and she couldn't breath and then started thinking "Oh my God, I am not ever gonna breath again". The seat belt had knocked the wind out of her. She also busted her lip on maybe the back of the front seat.

My poor dad. It was his birthday! 63 years old. He was crying. The girls said they were all apologizing to each other for wanting to go get Ice cream. My dad is at the ER right now for his shoulder. He couldn't sleep at all last night it was hurting him so bad. Megan is sore but really seems to be ok.

Wow. I don't have to search hard at all to have things to be thankful for this Thanksgiving. I can see the Angels moving my dads foot off the break and onto the gas. I see them keeping traffic away from that intersection so the car wouldn't spin and hit any other cars. I see them keeping the area where Evangeline was in the back seat of the car completely in tact. I see them reminding my family and the girl racing and her two passengers to buckle up. There is no doubt that seat belts saved everyone involved life. Period. I am so thankful for seat belts!!!!

Alicia. Thank you for taking my boys. I owe you big time neighbor! Eric, thanks for hanging with us at the ER. Your a good man Charlie Brown.

I know this all may seem a little dramatic. I don't care. I am crying while typing this because I came really close to losing them. When you walk up on a crumpled car, that reality hits you. Life is short. Love hard. Be grateful, everyday be grateful for your loved ones. They are precious. Thank you Jesus for protecting my family last night. Thank you for them.
family Finger Nail Droppings Holiday/vacation

nikki said…
Ahh! You are gonna make ME cryy!:( I miss ya'll so much and when I got the news mann I thought I might never get to see some of ya'll again! I asm soo thankful that all of ya'll are safe and we REALLY need to get together soon!

Anonymous said…
Girl, friends do not keep score cards. I love those girls very much and I am so thankful God protected them and your dad and step mom.

Watch E for whiplash...it can sneak up on you and it takes a few days before it really starts to hurt. Totally treatable but not fun. Physical therapy helped me a lot. Praying she doesn't have it tho!
11/23/2009

kimberly said…
Live every day to the fullest, this can really put a lot of things in our lives into perspective and get the junk out of our everyday doings that are just not important in the big scheme of things. I am so happy everyone is ok.

Anonymous said…
Thank you, thank you, thank you Lord for protecting my precious grandchildren and their grandPa Don. I feel like crying everytime I think of how close they came.
Love y'all so much. Love MOM
11/24/2009