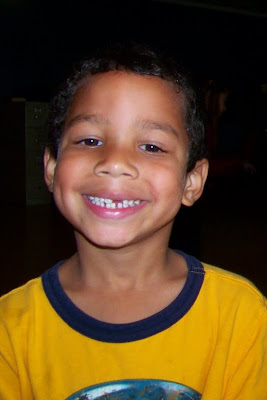 Steele had fallen and killed his front tooth when he was 2, he had to have it pulled a couple months ago because it was black, rotten and made his breath smell like poop.

A couple weeks ago Steele said "mom look at my tooth way up high in my mouth" he pulled up his top lip to show me a corner of a tooth sticking out of his top gum, way up above where the new, permanent tooth was supposed to come in. I was mortified. It was gonna grow straight out of his gum up there it looked like. I kept looking at it, touching it, trying to figure out if I should call the dentist, watch it or what. It was definitely his tooth coming out of his gums where it didn't belong and I wasn't sure what or if there was anything that could be done about it.

The other night during our bed time prayer I said "Steele, mommies gonna put her finger on the tooth sticking out up there and we are gonna pray that God will heal it and make it go back into your gums and down into the space it supposed too." Steele said "ok" and he closed his eyes and we prayed.

Today, Evangeline was asking Steele if she could look at it,(we had all become morbidly fascinated by this tiny corner of a tooth coming out of his gums) Steele lifted his lip to show her and when she went to touch it, the little tooth fragment fell out! His gum had a dip in it, like a mark where that piece of tooth had been sticking out but there wasn't a hole!

I told Steele that God had answered our prayers. Now the tooth could come on down under the gums, into the space it's supposed too cuz it was no longer coming out way up high in his gums.

I think it would be cool if that new tooth when it comes in, has a corner off it, like a reminder from God that HE did do this. He cares about even the little things and the prayers of a 5 year old boy.

It was a tooth miracle and we know it.
Family Pictures