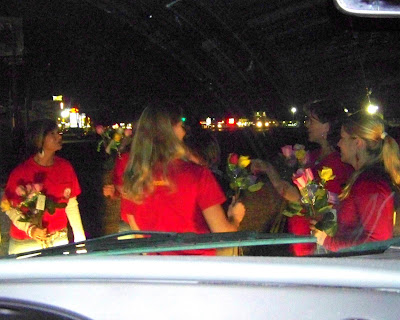 It was a cool and windy night. The first of it's kind this year in south Louisiana. It had been a very busy day for me and the Claritin I had to take that morning was making me so tired. I thought a few times about not going on Midnight.

I prayed and heard that small voice that says "Girl that is the devil. You know tonight is gonna be great. God is gonna move. You gotta fight this and go". So I rebuked the devil, the fatigue and after a good nap, I was ready.

We had a team of six great ladies from First Baptist Church of New Orleans, who drove in just for this outreach. We also had Valerie from Coast church in Pensacola, Kelly and Joe from Life Church in Memphis and three first timers from here at HPC.

We went to the normal clubs, made some great connections with the dancers, bouncers and patrons. Gave all the ladies roses with the HPC card attached that reads:

"We hope this small gift brightens your day. It's a simple way to say 'God loves you'-no strings attached. Let us know if we can help you. healingplacechurch.org"

And on the back of the card is the phone number to HPC, service times and a map to the church.

We then went north side.

When we stopped at Benny's Bar it was dead. I thought the cold was keeping everyone at home or something because even the Alamo Hotel was a ghost town. So we headed to Plank road where for the last two months we have encountered ten to fifteen transvestite prostitutes..but there was no one. We did not see one prostitute. So, we decided to head back, hit the Waffle house on the way and give their lady employees roses. And as always drop off 25 or so roses at the upscale Strip Club in our area. For over 3 years we had faithfully gone to this club, left roses for the dancers, but never been allowed in. I did not expect this night to be any different.

As we headed that way Dean says to Summer "ya'll are going in tonight Summer". Summer looked at him and said "Yea, that's right Dean. We just need to believe we are going in tonight". I tried to believe like Dean and Summer but I have to admit, I didn't really think it would happen. Summer explain to everyone how we had faithfully gone to this club for 3 years and had never been allowed in to hand deliver the roses. But we kept believing that one day we would be able to go in.

I looked to the back of the shuttle and I heard the baptist ladies praying quietly.

As we approach the club, Summer instructs me, Lesley who was a first timer from HPC, Valerie from Coast Church, Kelly from Life church and Allie from the baptist church in New Orleans to get 50 roses and each carry some. We were gonna walk up to this club like they WERE gonna let us in. We got out, and walked to the door...

..now most of the people in the shuttle are praying..

We approached the security guard. Summer boldly says "Hello, we have roses for the ladies. We'll take them in if that's ok?" and the security guys says "Sure. I don't think the manager will mind."

At that moment I knew I had to concentrate on making sure my face did not show the shock I was truly in!

My heart was racing...we were walking in. Surely we would be stopped at the front desk, No. On we went. Summer, Kelly and Lesley headed up stairs, Me, Valerie and Allie stayed on the main floor and handed out roses. Surely any minute the manager would realize we had been admitted into the club and throw us out. No. We gave out all our roses. One of the dancers came up to me. Shocked, almost in tears. put her hand over her mouth and exclaimed while hugging me "I go to Healing Place!! Oh my gosh!" Thank you!!" I told her I liked her bathing suite and wished her "Have a great night". My group exited the building. Followed shortly by Summers group. They also had given out all there roses. They had been stopped by a manager who only said "I love what ya'll are doing. Think it's great. Just next time call before you come".

And the entire time we were in there the ladies from the baptist church in New Orleans were praying.

Lesley, who is a friend of mine, goes to HPC and who came for the first time last night, told me today, "God allowed us not to see anyone on the north side so we would have enough roses to hand out in that club ."

What a great night. 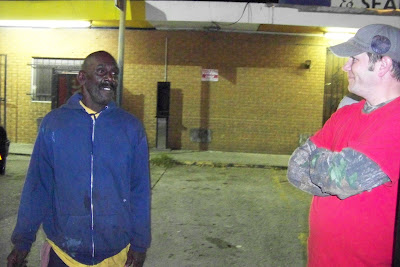 Dean talking to a man outside Benny's bar. This man lives at the Alamo and said he is gonna come to church at BRDC Sunday. 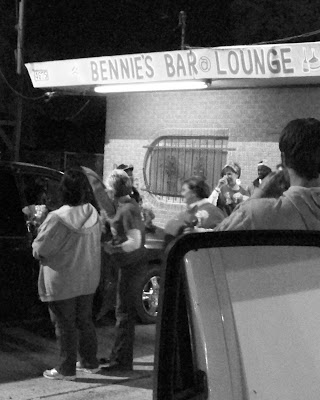 Getting to meet Benny himself outside of Benny's bar. Benny said he might come to BRDC Sunday. 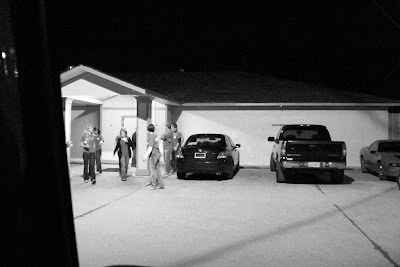 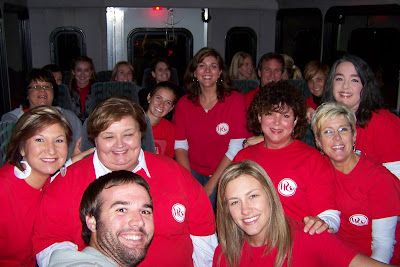 MOST of the people that were on Midnight last night. 'Cept Dean, Me and Chris Joy aren't in the picture.
Dream Center HPC human trafficking Midnight Outreach

Leesavee said…
Amen, Carole! We always need to remember that God calls on us to love, not to judge. We are all sinners, yet God loves us. Thank you for sharing that story.
10/17/2009

janet said…
Carole!! my neice works at one of thoses upscale strip clubs on airline in south br and attends

I didn't realize that last night was midnight outreach. A friend called me & told me they saw the red shirts getting in the bus at a gas station. I am so glad y'all finally went into that club that had said "No" all those other times. The power of prayer is so amazing!! Perseverance is the answer!

Lesley said…
Last night was one of the most eye opening, powerful, amazing, heart-breaking nights of my entire life. All day today I kept wondering where those girls were, what must they be thinking and/or feeling today. I have cried for them, and I have prayed for them. My world was rocked, thank you Jesus.

I feel so blessed and thankful to have been part of that group last night and I am now on fire to keep reaching out to these precious daughters of our Father...He loves them just like he loves us...imperfections, faults, sin and all. THEY are so much more valuable to Him than they know. I'm SO ready for the next Midnight Outreach!