So my husband got an iPhone 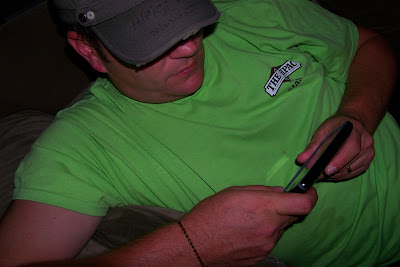 And this is how he has been since getting it 4 days ago.

Dean has never been a computer guy, only got on to check mail or little stuff like that...But now, with the Internet in the palm of his hand..now that he has THE iPhone well.. every thing has changed.

He now likes to tell me what the weather IS and what it "feels" like outside, he lets me hear the different Fart noises and reads me meaningless trivia, shows me daily bible verses and the GPS thingy. He also likes to say stuff like "Did you see what Donna Clyde wrote on Facebook?" and "Matthew Barnett twitters a lot huh?" AND he's even twittering himself now cuz he has a snazzy Twitter app on his iPhone. He is also texting a lot now, which he didn't have on his old phone so he's kinda out of control with the 10 text to me just from an hour trip to Walmart last night. But the worst is Pandora Radio, his is set on Poison Radio, yea, Poison as in Brett Michaels horrific hair band Poison. We had to listen to that on the way home from church yesterday. 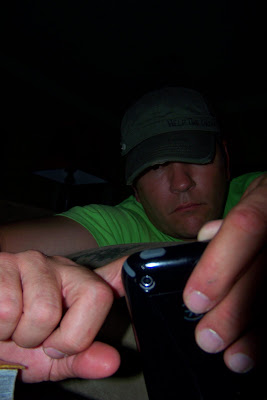 Unknown said…
If your husband likes new toys, check out a Livio Radio with Pandora. That way he can share Pandora with the whole family. The best part is no fees or subscriptions. http://tinyurl.com/blog-jnl
Is a website you can check out. IF you have any questions you can call me at 248.591.0333 ext 891 or you can email me at jaclyn@livioradio.com
8/04/2009