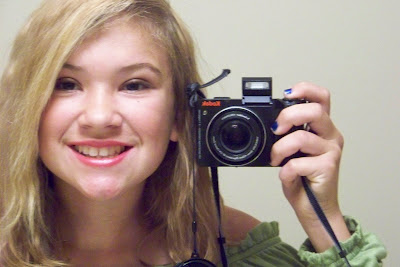 This is my baby girl, Evangeline. She will be 13 on Friday. We are throwing her a "70's 80's and 90's Music Icons" party. Everyone has to dress like a music icon from one of those decades.

It's hard to believe she is gonna be a teenager! There is still so much about her that is so sweet and innocent...so young. I told her every year not to grow up any more but she didn't listen..none of my kids listen when I squeeze them and kiss their baby fat cheeks and wish time didn't fly by so fast.

I remember when she was about 5 or 6 years old, we had taken her to a Hockey game and when a song played over the PA system, there would be a spot light that shined on someone to see if they would dance. The spot light hit on some girls that were about 12 or so, dancing and acting silly in the stands. They weren't being racy or seductive, they were just free and fun and innocent. I prayed right then that God would give Evangeline that fearless love of laughter and dancing and that she would never be intimidated by what people might think.

She really is that girl. ..and far more.

I also remember 11 years ago, she was only 2 and on August 11th went into PICU for 3 days because of undiagnosed type one Diabetes. A lazy doctor had almost let our daughter die. I know now how close to death she was. But she was a trooper then and still is. She has more responsibility then any other 13 year old I know. She has lived with diabetes for 11 years and that is a huge burden that only other diabetics and their family can understand. It's a lot for a child.

And I know without a doubt that my boys would say that there sissy is the best sissy ever. I am DAILY amazed at the love between ALL my kids. The care, the concern the deep affection that Evangeline has for Steele and Abel is indescribable. It came without pause or hesitation the minute both Steele and Abel entered our family.

I live through her so much you know. As someone who was and is insecure, worried about what others think and very affected by anything negative that comes my way, it's good to see her strength, her resolve and also her humility, teachableness and heart felt desire to really be all that God has for her to be in this life.

I thank God for her.

And I will have fun embarrassing her at the party with my fantastic dance moves...he he he he :-p
Diabetes family Family Pictures

dan king said…
Happy birthday Evangeline!
I love how you paint pictures with your words Carole! Your daughter sounds like an amazing young lady!
7/15/2009

The Lady with the Dragon Tattoo said…
It seems amazing when they turn 13 because I was just looking at my little girl in February amazed at how fast she is growing up. And yes it is fun to embarrass your daughter with dance moves. I do it all the time.

Evangeline is an awesome girl and I am glad Raven is friends with her. I hope she has a Happy Birthday.
7/15/2009

jennifer maggio said…
sniff, sniff. that was such a sweet tribute to her!