Remembering What was Lost 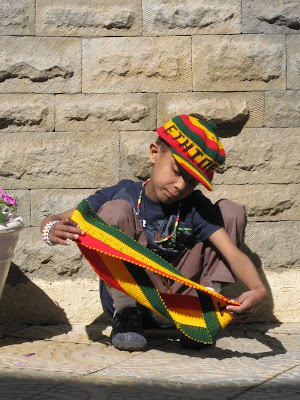 Tonight Abel came into my room and crawled up in bed beside me where I was working on my lap top. He asked if he could "watch Ethiopia video" which means he wants to watch the picture slide show that I have on the computer from when we were there getting him.

While we were watching it he asked to see pictures of Tesfa, and when I showed him one, he said

I of course nodded my head and lifted my eyebrows in impressed amazement and said, "wow, that's really cool".

Then we continued and watched all the video's from our trip.

One was a video of him and Dean, sitting on the floor of the Guest House, playing with a match box car. He said "look Steele! That's me with Dad. I like that place. Go back there, sleep"

I said "we cant baby, it's too far. You liked the Guest House huh?"

Abel: "Yes mom, I like sleep there. Play. Tsegaberhan there"

Me: "No Abel, Tsegaberhan is in American, in Indiana, she's not in Ethiopia any more. We are going to see her in two months!"

Then he asked to call her and we did but no one was home so he left a message.

We then went back to watching video's. The next one was of us first meeting him.

Me: "Abel, you really liked dad right off huh?"

That broke my heart. I knew he was mad kinda when we first got him, that I wasn't her. I could feel it. He wouldn't even really look at me.

I know now that the "mom" he wanted to go to was his grandmother. since his mom had died when he was only 1, Grandma had been mom for his entire life.

After that we went and looked at all his pictures. When we got to the one of his "brothers" (they are really his cousins but over there they don't have a word for cousins, they call them brother and sister) he put his hand on the picture and said "oh,I want to go to them. I miss them"

I had to again tell him it was too far.

Next we looked at a picture of his grandmother when she came to see him before he left to come here. I am pretty sure the picture was taken when she had to appear in court to testify for the adoption hearing. I asked him if he was happy to see her when she came, he said yes and that she stayed four nights with him there.

So we went into his room, I grabbed the new bulletin board I was waiting to hang up until after I painted tomorrow, and I nailed it to the wall tonight, so he could have a place to display all his pictures from the life he once had.

I told him that I was so happy he was here with us and was our child now and that I would be sad if he left me. Sissy would be sad, dad and Steele, and that we all love him very much.

He gave me a small smile and a few seconds later he was laughing with Steele and watching the movie Cars.

That was all the remembering of what was lost he could handle for the night.
Adoption Family Pictures Orphans

Erin Moore said…
This post spoke to me, it's 4:50 and I've been up since around 3:30. Some of that is time change adjustment, but some of it is thinking about Ethiopia. Particuarly, a certain 9yo boy I met at one of the orphanages. I would have never selected a 9 year old boy to break my heart, if it were up to me, I would have chosen a 5 year old to break my heart and lead me to the decision to adopt. But that didn't happen. As I ponder this 9 yo boy, I can't help but think if it's fair to adopt him. He's been institutionalized since he was four. Everything he knows is there, all of his friends are there - how could I steal him away from that? Of course, there is the matter of his future - what future does he have in Eth? Wouldn't our family some how compensate for the family of friends that he'd lose? Over time, wouldn't coming to America be better for him?

I don't have the answers...but reading your post while I'm pondering these things seems timely.
4/27/2009

Lesley said…
Wow Carole, this post leaves me with an aching heart and tear filled eyes. What a precious, brave little boy you have been blessed with. He has been through so much in his short time little life. I pray that one day those memories will bring happy feelings instead of sadness. You are truly doing an amazing job with him, Carole. I'm praying for all of you!!
4/27/2009

Anonymous said…
Carole.. I hear ya. Lezawe Moses asked a million times today if he was staying here, or going back to ET.

You are doing great. I am learning from you, and so glad we've connected!

Moses was looking at photos of ET today from your trip and kept pointing at you and saying "MOM! ABEL! MOM! ABEL! AMERICA!!"

Adopting1Soon said…
Would he understand if you tod him he could go backwhen he was older to visit?

I'm thinking it must be so hard to be thinking: "I'm NEVER going back."

But maybe "later" is too hard of a concept to grasp right now....??

HerstoryGirl said…
So sweet and sad and poignant... I'm about to cry!

You are doing an AWESOME job, Carole! Abel is a lucky little boy to have come into your family. God bless him and you.
4/27/2009