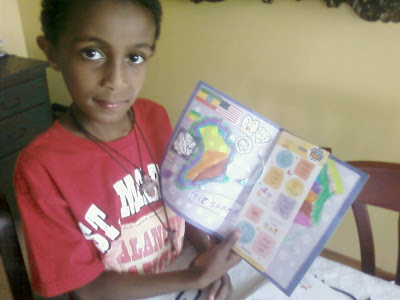 Showing off a card he received from Tes. He loves and misses her. 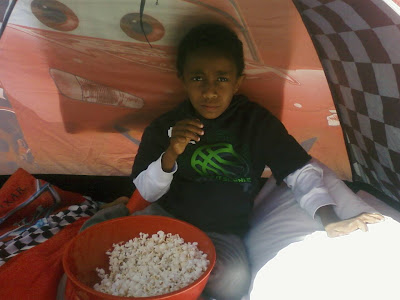 In the tent they set up in the back yard. He kept saying he loved his house. 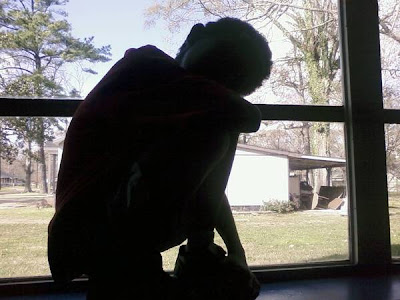 Sitting on the window seal at the Dream Center last week during the After School program. This was our first day back volunteering there but he wasn't feeling good, had a fever from immunizations (I didn't know he was running fever until after I took this picture and noticed he was moaping around and looking sad) 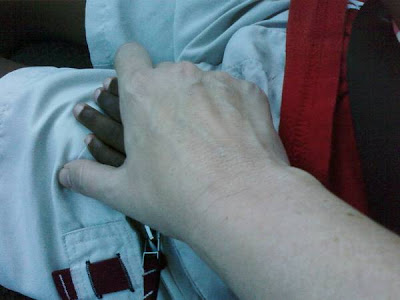 In the car on the way home from the Dream Center, he let me hold his hand because he was feeling bad from the fever. 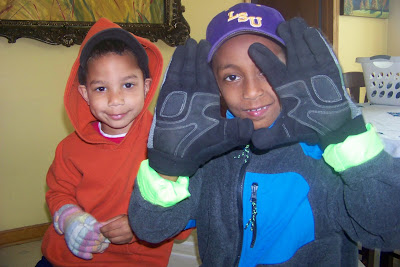 Getting ready to go out and play. It's not that cold but him and Steele felt the need to bundle up.

It's actually hard to believe it's been a month. He really does seem to be adjusting well. He never talks about Ethiopia unless we show him video's or I ask him questions.

When I do ask he says he lived in a big house with his grandmother, dad, mom sisters and brothers. BUT I was told by the people in Ethiopia that cousins, aunts and uncles are called that over there. They don't have a word for "uncle" or "Cousin". The director of our agency over there assured me that his mom and dad died when he was a baby from AIDS and that he may have lived with relatives but no siblings and that the grandmother had to come to court and testify to all that. It does make me very sad that they couldn't take care of him for whatever reason.

He eats whatever really. He never ask for Ethiopian food and seems very content with life here.

He does get sad sometime but it seems to be when he gets in trouble for normal kid stuff. He pouts, says "no" wants to eat 24 hours a day, doesn't like to pick up after himself, all the normal kids stuff.

One thing we do deal with is he doesn't like being at the Dream Center for 4-6 hours on Sundays. He gets really cranky, starts asking to go home, and wont talk to anyone but us. Last Sunday I really got upset at him because every time someone would say "Hello Abel" to him he would ignore them and if they tried to touch him, he hit their hand away. At first I felt I should try to correct the behavior, maybe put him in time out or something. I kept telling him he had to speak to them, not ignore them and he couldn't hit their hand away. But then I realized he needs more time and a little more grace for that. People one after another were coming up to him every time we were at church and it was just too much for him. I also realized getting upset was more about me being embarrassed by his behavior, feeling like people would judge me as a parent for him not responding properly to their greeting, rather then understanding how he is still adjusting to this environment.

I am learning so much from the addition of Abel to our family. We all are, and God is here. I make mistakes, things go right, things go wrong, and over all after a month here in America, he is doing good.
Adoption Africa Family Pictures Orphans