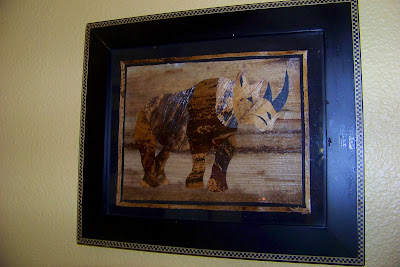 I bought this African art while in Ethiopia. The brown and tan part with the Rhino on it is made up of thin wood strips and it's on a thin black cloth. I already had the frame.

I bought it because Rhino's represent what I want from life. After reading The Barbarian Way by Erwin McMannus I was so struck by the visual he painted with the Rhinos.
_________________

"...most groups of animals have unique names or designations when they dwell together. With insects most of us know that bees are called swarms, and ants are called colonies... But my favorite of all is the group designation for rhinos.

You see, Rhinos can run thirty miles an hour, which is pretty fast when you consider how much weight they’re pulling. They’re actually faster than squirrels, which can run up to twenty-six miles an hour. And even then who’s going to live in dread of a charging squirrel!

Running at thirty miles an hour is faster than a used Pinto will go. Just one problem with this phenomenon. Rhinos can see only thirty feet in front of them.

Can you imagine something that large moving in concert as a group, plowing ahead at thirty miles an hour with no idea what’s at thirty-one feet? You would think that they would be far too timid to pick up full steam, that their inability to see far enough ahead would paralyze them to immobility.

But with that horn pointing the way, rhinos run forward full steam ahead without apprehension, which leads us to their name. Rhinos moving together at full speed are known as a crash.

Even when they’re just hanging around enjoying the watershed, they’re called a crash because of their potential. You’ve got to love that.

I think that’s what we’re supposed to be.

That’s what happens when we become barbarians and shake free of domestication and civility. The church becomes a crash. We become an unstoppable force.

We don’t have to pretend we know the future. Who cares that we can see only thirty feet ahead? Whatever's at thirty-one feet needs to care that we’re coming and better get out of the way.

We need to move together as God’s people, a barbarian tribe, and become the human version of the rhino crash.

The future is uncertain, but we need to move toward it with confidence.

There’s a future to be created, a humanity to be liberated.

We need to stop wasting our time and stop being afraid of what we cannot see and do not know.

We need to move forward full force because of what we do know.

We are going to Okeechobee Florida at the end of next month so my family can meet Abel and while I'm there I think I may go get a tattoo....

of a Rhino.
Africa Books HPC Matthew 25 My issues

Anonymous said…
A Rhino tattoo sounds great!! great converstation starter! I wish I could endure the pain of a tatoo b/c I'd get one..but I'm chicken!! go down to Miami and get on Miami Ink! you have a good story to tell, maybe they'd let you on the show
2/12/2009

HerstoryGirl said…
I LOVE that book! Completely forgot about that when you twittered it... gotta admit, that rhino comment completely caught me off-guard.
;)
2/15/2009