February 02, 2009
I took this from Dean's Blog, he never post on it unless something really big happens, this is big... 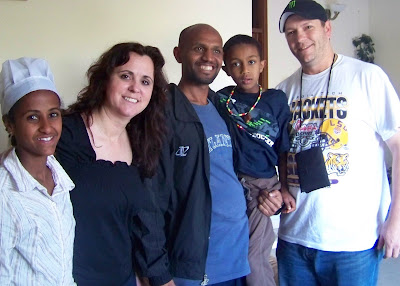 the cook (forgot her name) Carole, Johnny, Abel and me at the quest house

1 dollar a day would feed a family. O.K. when I would see those commercials on T.V. about Ethiopia. I thought that was a load of crap. There's no-way you could do that. those people in that commercial are trying to rip us off and take my money. Then I went there to pick up our 6 year old son that we adopted and was I wrong. Not only will that feed a family that also will buy you a bag of the best coffee in the world(and I hate coffee but I drank it there), a can of Coca-Cola, a pack of gum (from the street kids), and still have some change left over.
When I was there we stayed at a Guest House (like a Bed and Breakfast here) and I talked to the night desk worker a lot. His name was Johnny and he had just graduated from University with a degree in business. Very smart and nice man. We talked about his country and my country. He asked if there were poor people in America and was shocked when I told him yes. He thought all Americans were rich. I asked him what a construction worker makes and he told me around 800 bir a month ($80). There was a lot of construction work going on in the city. He also said that it was hard to find a good job there and that's why he was working at the Guest House. (I think he was a Angel from God sent there for us.) He helped us out so much by telling us what the kids were saying,took us to a shop to get a back-pack when mine broke and would not let us carry anything no matter how hard I tried to get it from him. I gave him my Steeler's hat that I brought with us and he would not stop saying thank you every time I would see him he would have it on.
I have so much more to say but words would do it no Justice
Thanks for all your prayer
Dean