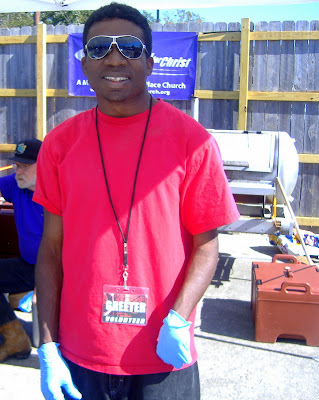 His mother was a drug addict, his father a minister, both were married to other people when Anthony was conceived. His Auntie raised him. She taught him about Jesus and when she died in 1999, Anthony was devastated. He cried out to God and God met him there. He started walking with Jesus.

By 2005 Anthony was struggling with life. His mothers had died from her drug addiction and he felt far away from the God that he knew was the only true comfort and peace.

Today Anthony serves faithfully at the Baton Rouge Dream Center and he is changing the world with his determination and his amazing heart for Jesus. You wont see Anthony commanding a crowd or being the center of attention, you'll more likely see him quietly smiling and greeting people. That unassuming light that warms everyone around him without us even knowing where that light is coming from, salt of the earth, that's Anthony.
Dream Center Matthew 25

Elysa said…
Absolutely beautiful. Our God is so awesome and DOES radically change lives!!! Praise God!!!
11/25/2008

Anonymous said…
Really enjoyed this. I would never have known this much about the quiet servant named Anthony. May God continue to bless and prosper him.

Anonymous said…
Hey Carol Vince told me about your Anthony post. I had the opportunity to bring Anthony home from church last sunday after the Thanksgiving Dinner and I did not know any of his history,,, just that he is a very humble guy who does his part to make the world a better place. Well on top of that we had about 50 snack boxes from Randy Rogers that we needed to give away and Anthony wanted them so he could pass them out to people in his neighborhood.... Always thinking of other people. So with his good arm and his not so good arm he carried those cases all by himself. I prayed with him before I left. Sometimes while we are waiting for big miracles to happen, small ones are performed right under our noses....
GOD bless Anthony
Franco
11/27/2008

Cindy said…
I prayed with Anthony that day at WOW Jam and stood by him the next when he was baptized. He is so quiet and humble, but you can tell by being around him that he is a man of God. I'm glad to serve along side him at the BRDC.
11/27/2008