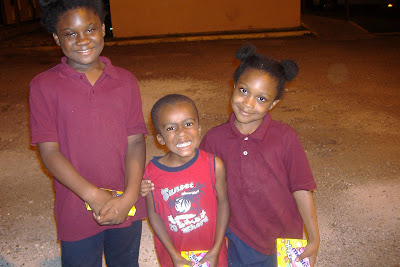 Montee in the middle of two friends at the Alamo Hotel

Friday night while we were out doing Midnight outreach I ran into Montee, he's a wiry four year old that comes to Thrive on Fridays and church on Sundays with his grand mother. The first time I saw him, I loved him. He has a large head, a jittery mannerism and wild eyes that dart back and forth when you talk to him. I kiss his big round head and hug him tight every time I see him. If they'd let me I'd take him and wouldn't think twice.

He was as happy as I was when we saw each other Friday night at the Alamo Hotel. He loves me as much as I do him. He was outside at 11pm playing with some other kids and roaming around the drug infested, prostitution haven that is the Alamo. I never saw his grandmother. We gave him and his friends candy and made sure they knew we would be there Sunday to pick them up for church. I hated to leave him. His grandmother is mentally impaired, I have never seen his mother and Montee looks malnourished and un-mothered.

Today he was at church. He was being loved on by Mrs. Susan Rogers, she works with the 3-6 yr olds. I kissed his head but had to go work with the older kids. And that's ok, cuz' ain't no one can love on a wiry little four yr old like Mrs. Susan.

When Montee comes on Fridays to Thrive with his grandmother he gets a snack and lunch, clothes out of the boutique and he gets read too, loved on and treated with kindness. On Sunday he gets breakfast, snacks and his grandmother gets a bag of groceries. He also learns about Jesus and sees him in action through people like Mrs. Susan and many others.

34 -36"Then the King will say to those on his right, 'Enter, you who are blessed by my Father! Take what's coming to you in this kingdom. It's been ready for you since the world's foundation. And here's why:

37 -40"Then those 'sheep' are going to say, 'Master, what are you talking about? When did we ever see you hungry and feed you, thirsty and give you a drink? And when did we ever see you sick or in prison and come to you?' Then the King will say, 'I'm telling the solemn truth: Whenever you did one of these things to someone overlooked or ignored, that was me—you did it to me.'

Anonymous said…
You have quite a daughter. Spending her young years serving in places most adults don't even know exist... What a training ground! Can you even imagine where God will take this kid as an adult?! He has big plans, I tell ya...big plans! (I'm keeping my eye on her :)