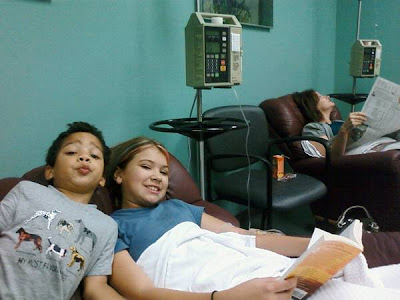 E getting some fluids 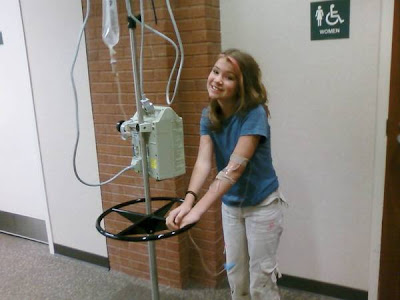 E feeling alittle better after one bag of fluids and going to the bathroom with her IV.

Sometimes when E has a virus or something like that we can manage it at home with extra fluids and insulin but sometimes it's not so easy...like yesterday. She had started throwing up during the night and by 8am she was so dehydrated it hurt her to walk into the Doctors office.

It's hard to explain but in a nut shell a normal stomach virus can be very dangerous to a diabetic. Without a functioning Pancreas blood sugars go crazy when your sick, so the body dehydrates quicker. The good thing is if no fluids can be kept down then the ER or the Dr office will just hook a diabetic up to a couple bags of fluid so they wont dehydrate and die.

Yea, not being dramatic but if you have a functioning pancreas thank God for it.
Diabetes family Family Pictures

Elysa said…
Praising God that she's better and once again I'm reminded how thankful I am for the American medical system.
9/24/2008

Unknown said…
Thanks for the pics My hubby is diabetic and I work diabetic kids at times!!
Glad she is better
9/24/2008

Anonymous said…
I am glad our E is feeling better.
Hope she gets over this virus soon.
I love you ms. E. Love GrandMa
9/26/2008

Lana said…
Hi Carole, I've been 'lurking' for several months (Wow, that sounds disturbingly like 'stalking'!) I went to Swazi last Feb, on a trip very similar to your Dean's, & when I came home, I looked up HPC and found your blog. I've been coming back ever since because you and your family have really touched my heart, and made me re-think how I feel about orphan-care. I'm writing today because I've been thinking about 'A' (I've been reading long enough that I know his real name) a lot this week. Carole, I've been praying & will continue to pray for a swift reunion for A and his Forever Family. Also, please tell E that she really inspired a group of kids in Bloomington, IN. I'm a Children's Pastor and I shared "Li'l Stinky E's" story w/my kids--they loved it. The girls were impressed and the boys were so motivated that they began a fundraiser of their own--$400 to dig a well in Uganda! Anyway, just felt led today to tell you to hang in there. I'm sure you don't know the many, many people out there praying for the Turner family. Hugs & Blessings! Lana Bledsoe
9/26/2008

Carole Turner said…
Lana, thanks for your comment. So glad you Lurk ;-) You prayers are so appreciated and felt, thank you. God Bless, Carole
9/26/2008