U2 and the bands who pretend to be them 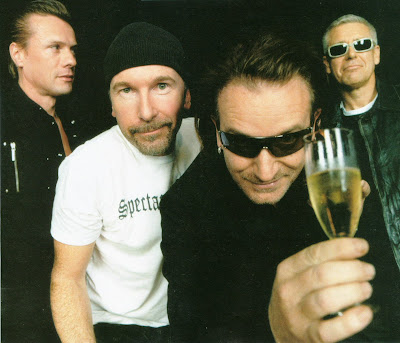 I Love this article because it mentions the most over rated band of the millennium, Cold Play. They really are big time U2 wanna bes.

" Today U2's first three albums, Boy (1980), October (1981), and War (1983) have been re-released to remind us of their humble Dublin beginnings. And while some would say they've worn out their welcome, I say that any band who stays together, works hard, and plays every show like it's their last is all right with me. They've made the world safe for anthemic rock. Any modern rock band who plays two chords before jumping a dramatic octave owes something to U2.

Here are three bands who wouldn't exist without U2. I'm sure you'll have your opinions. Go ahead and have at it. I can take it.

THE KILLERS
Listen to "Mr. Brightside." Ignore the matching '80s suits and listen to that guitar sound and the bass pumping out root notes. Sound familiar?

RADIOHEAD
Before they beautifully detoured into art rock esoterica, Radiohead was vying for the anthem rock throne. Their aching "High And Dry" was offered up as their version of "With Or Without You."

Joyce said…
This is interesting..Gabe just went to a "Coldplay" concert last night in Hartford, he was a guest in a special "VIP" booth. He called today to tell us how cool it was. I'd have to choose U2 though. They are legends now. :~)
8/03/2008